noteboom's overall pff score is pretty weak, but it's his run score that's dragging down his overall score, in pass pro he's graded ok, which i think showed in the seattle game... in fact both noteboom's and edwards's run scores are pretty weak, 44.1 and 60.3 respectively, especially when compared to hav's and corbett's run scores of 86.5 and 70.8 respectively... on a side note, hav has been a beast in run blocking this season according to pff, he's their 4th highest graded run-blocking offensive tackle and ranks 7th overall.

noteboom and edwards will most likely be facing pierre-paul and gholston most of the day, two guys that are having big seasons, with pierre-paul ranking 6th in most sacks (7.5)... the good news for the rams is vea is ir'd, a guy who was having a monster year, while pierre-paul is battling a knee and is questionable for the game.

last week against the seahawks the rams used more tight ends per snap than they have all season (1.7), you have to believe that they will go back to this well against the bucs, if nothing else to give noteboom help on the left side. 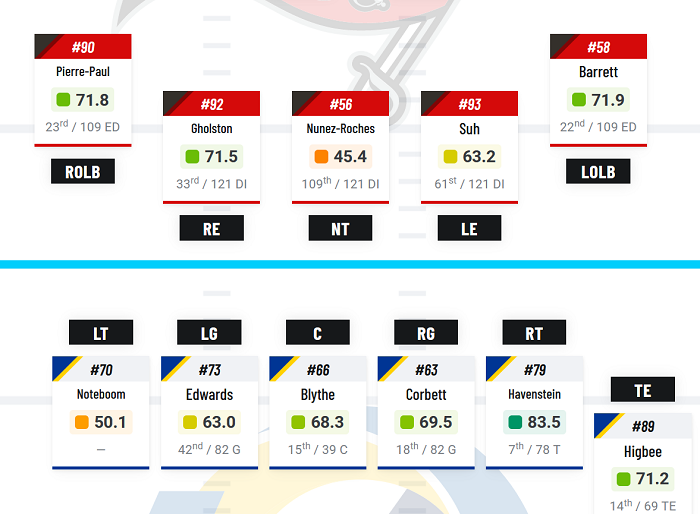 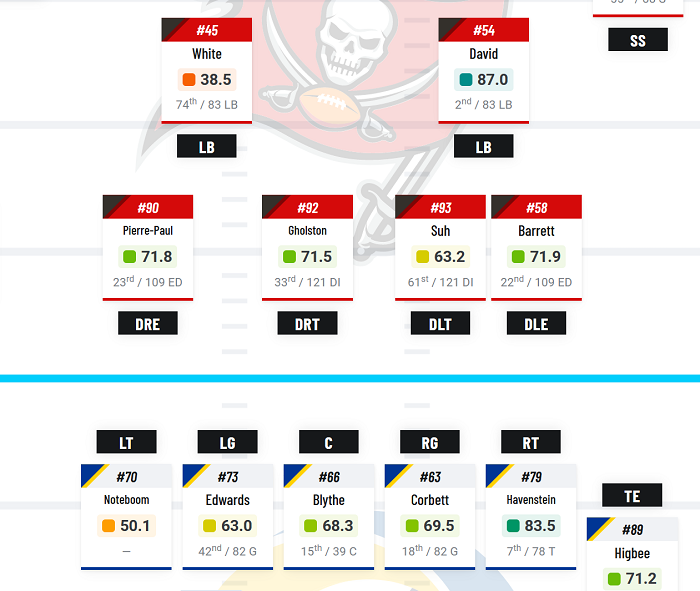 Pro Bowl
NOTEBOOM + EDWARDS
POST #2
aeneas1 liked this post
I concur that the Tampa Bay D is full of talent on the roster and also well coached.
I call the Tampa Bay Defense a "Hornetnest" in another thread.

CanuckRightWinger wrote:I concur that the Tampa Bay D is full of talent on the roster and also well coached.
I call the Tampa Bay Defense a "Hornetnest" in another thread.

Hall of Fame
NOTEBOOM + EDWARDS
POST #4
aeneas1 liked this post
I figured you would post the stats on this and thank you for doing so. This has been my worry since big whit went down; predictability. We will run right way more than left unless we have a TE next to boom - which will quickly be sniffed out as a tell. MCV: time to make your bones. We simply cannot be a run right team, can we? Well, if you impose your will you can do anything right? See what I did there?

I digress. I am not worried about our D. Ya, big challenge. But they have the scheme and horses. The O? Man - Goff simply must handle pressure better. MCV has to get him out of the pocket. The OL has to be more physical and adaptive than they have ever been. Boom sucks at run blocking - at least from a power stand point at the point of attack. Hopefully they have schemed up a way to run left enough to stay balanced and somewhat unpredictable.

Personally, I would use the heavy run-right game to set up the backside screen-left game. Bate that DL and those fast flowing LBs to slide and scrape to the play side, then dagger their asses with backside screens and shallow routes. If MCV has some hard outside zone right play action to naked boot - backside pass plays cooked up, now is the time to release the Kraken on that shit.
RFU Season Ticket Holder
1

Hall of Fame
Re: NOTEBOOM + EDWARDS
POST #5
aeneas1 liked this post
Well. They tried a lot of this. The screen game was, eh some success too predictable. The boot game was strong. The run game was stifled to either side. We need some more power G runs. IF our guards can pull and hit moving targets - might not be athletic enough for that. And it was just one game. Ran the ball well up until tonight. Didn’t matter though. Haha
RFU Season Ticket Holder
1

RFU Survivor Champ
NOTEBOOM + EDWARDS
POST #6      TOPIC AUTHOR
PARAM liked this post
i think team noteboom and edwards passed with flying colors tonight, which was encouraging as hell, especially given they found themselves on the weakside more than a few times... as mentioned earlier in this thread, noteboom has been graded average in pass pro by pff in the past, it's his poor run blocking grades that have dragged his score down, and my guess is his pass pro marks will only get higher after tonight's game, especially since both he and edwards faced a real pass pro test against the bucs, a far cry from the makeshift deal they have going on in seattle.

run blocking? i have no idea what mcvay was trying to do in the run game, or what his plan was, especially once the bucs made it clear early that they were going to stack the line and make goff beat them... in fact at that point it seemed that mcvay's run plan was nothing more than a "well let's give this a try, maybe we'll get lucky" approach... in other words, seems hard to blame anyone on the oline for the lack of running success, i mean the bucs just ate up the outside zone, ate up the tight ends and wr trying to seal edges, the bucs didn't flow with the line, the just stacked it and shot gaps, blew up the zone, the rams had no answers.

anyway i think the oline did a solid job overall, i just can't saddle them with the run performance, to me it was much more an x/o issue, but noteboom and edwards playing their first full game together at their positions exceeded expectations, especially in pass pro, am looking forward to watching these guys on the all 22, i post some clips.
1

Hall of Fame
Re: NOTEBOOM + EDWARDS
POST #7
PARAM liked this post
Against that type of D scheme is where the power, man blocking , and G pull/power should work. It’s just not what we do. Not sure if we can or if we just have our run game, outside zone, jet, rare toss play, more rare delay-draw; we are what we are. Most defenses can’t do what TB did me thinks. We will soon see. If Goff et all can shred them in the passing game, does not running effectively matter?
RFU Season Ticket Holder
1