Hall of Fame
Those Loaded Defensive Fronts
POST #1      TOPIC AUTHOR
rams opponents are clearly trying to copy what the patriots did defensively against the rams in the super bowl, and it seems to be working to some extent, at least in terms of throwing a wrench into the run game and keeping the offense out of rhythm.

a handful of defenses had success against the rams last year, but imo a few games conspired to paint a false picture of teams finally figuring out mcvay, for example the weather in chicago where both qbs failed epicly, not to mention the bears owned the league's top defense, the noise in new orleans, a tough eagles team that had beaten mcvay's rams in the past (altho the rams offense did put up 400+ yards against them), etc.

watching the all-22, the 2018 bears, eagles, lions, saints, etc. did not do what the patriots did defensively against the rams in the super bowl, these teams did not stack the los with defenders as did the pats, but that's exactly what teams are doing in 2019 against the rams.

out of these loaded fronts defenders are shooting gaps while guys covering the rams slot wr are often playing on the los and letting the slot guy go in favor of containing the edge or blitzing, it's been effective as hell.

my guess is teams will continue to do this, copy the pats, until mcvay can prove he can defeat it, in fact it will be interesting to see if the niners, who have been very successful through week 5 running their 4-3 scheme, will also throw a bunch of 6-1 and/or crowded front looks. 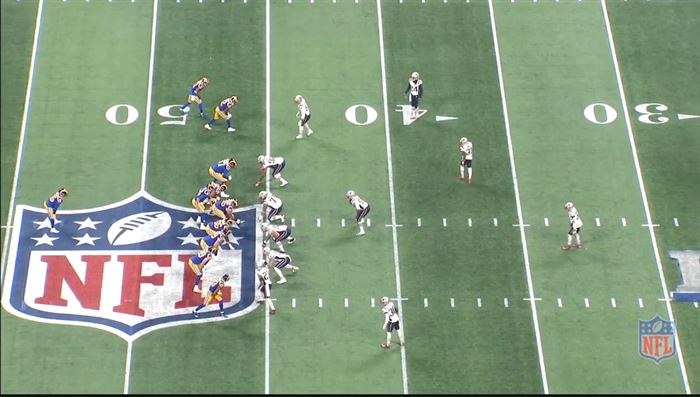 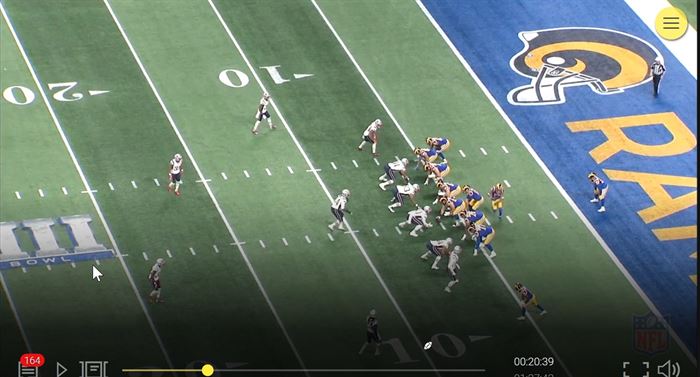 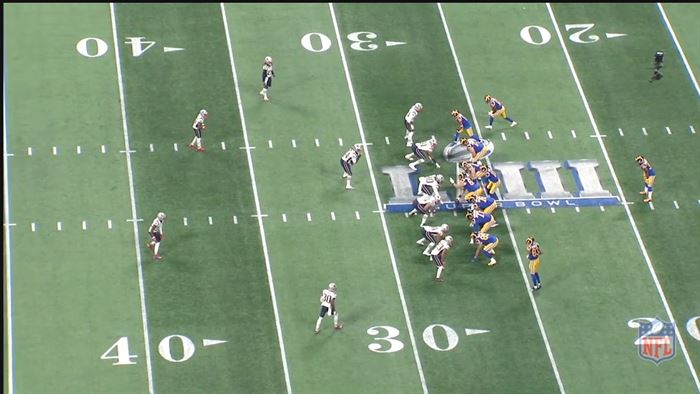 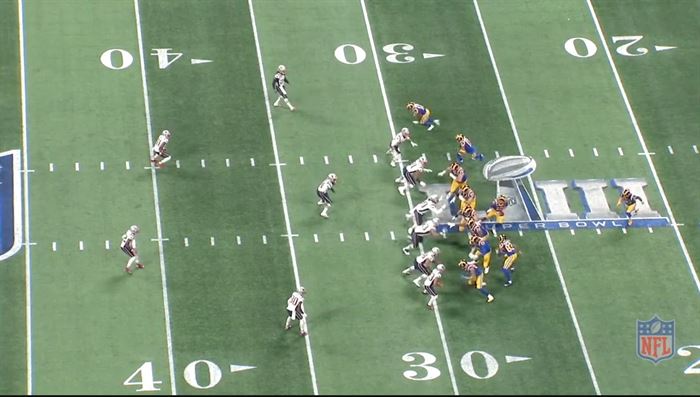 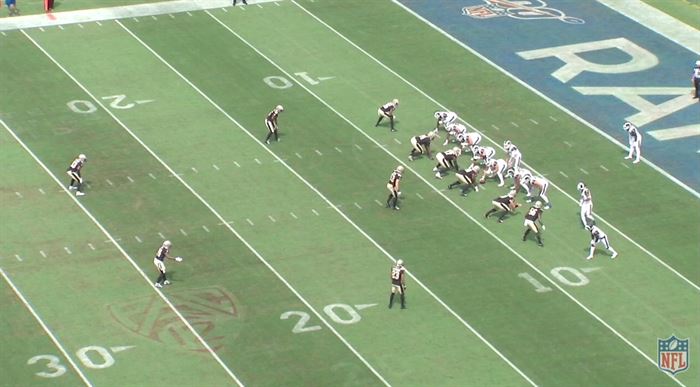 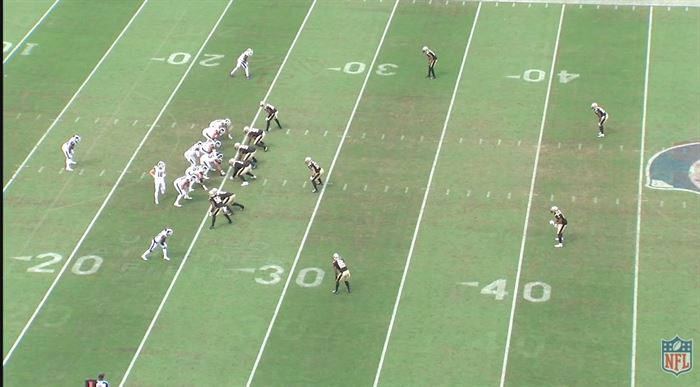 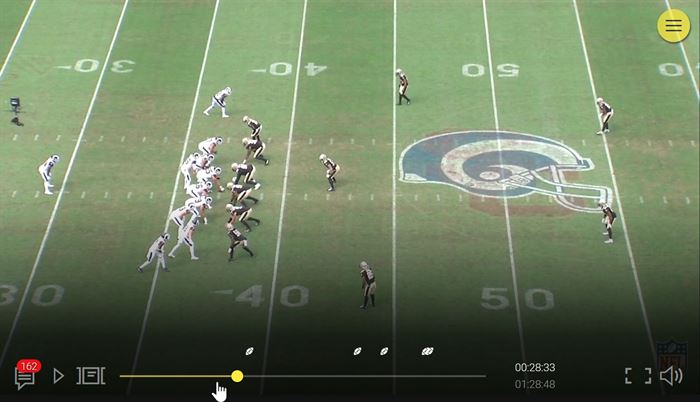 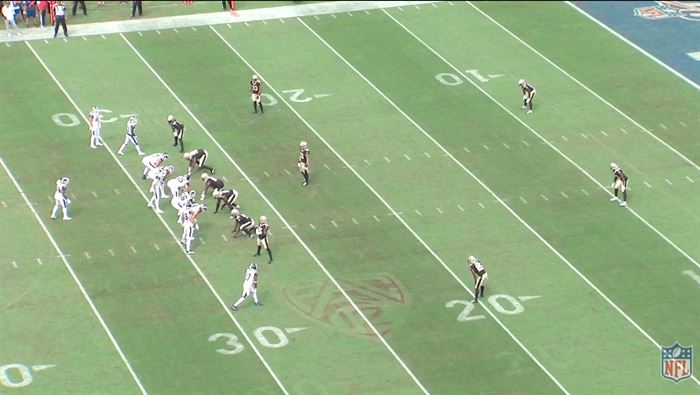 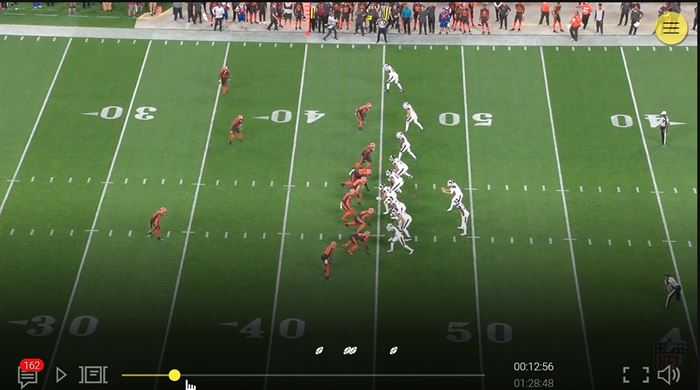 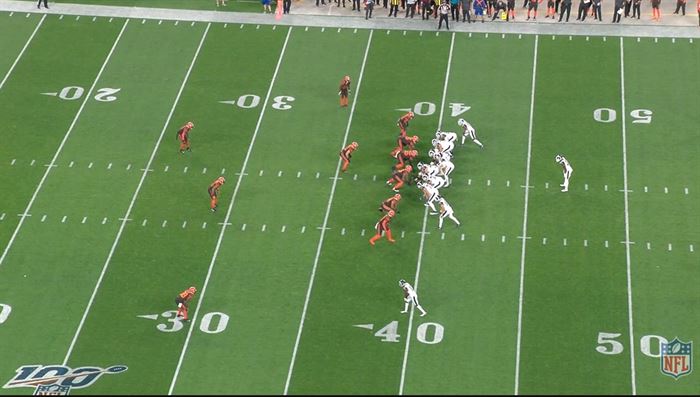 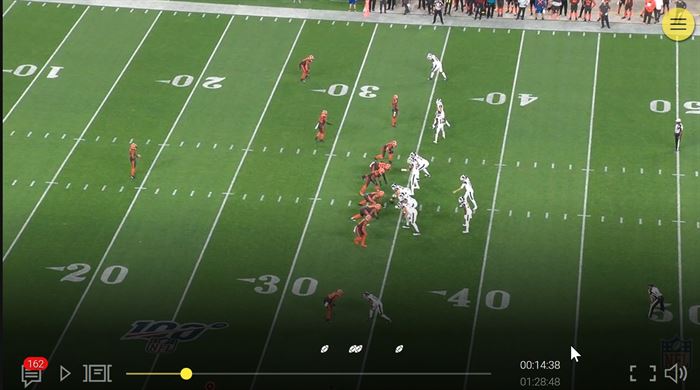 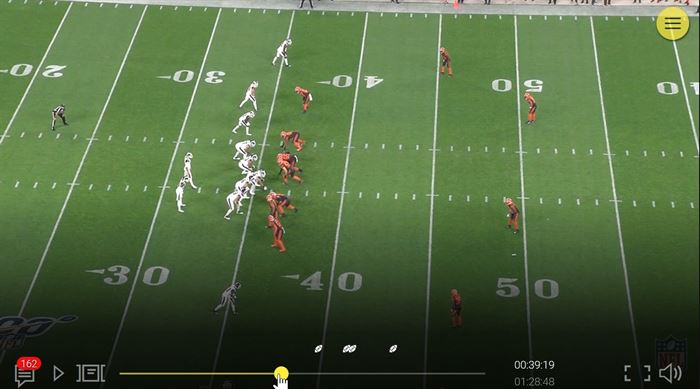 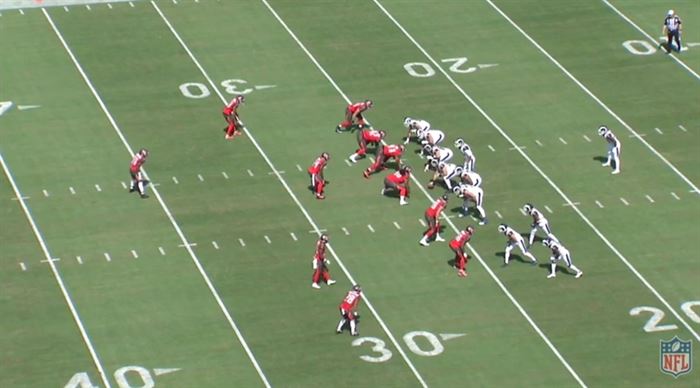 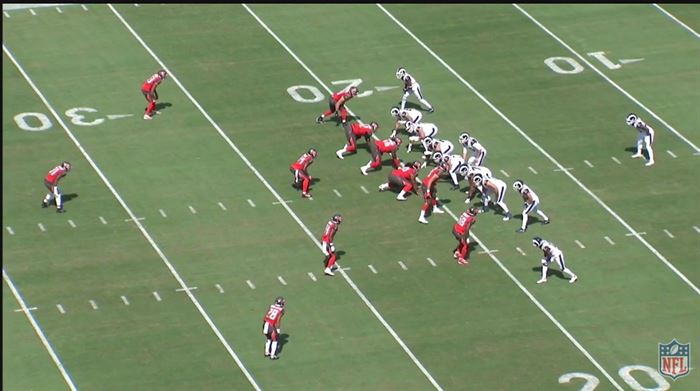 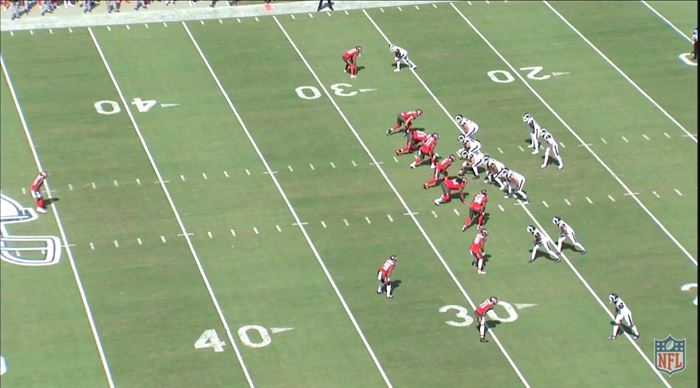 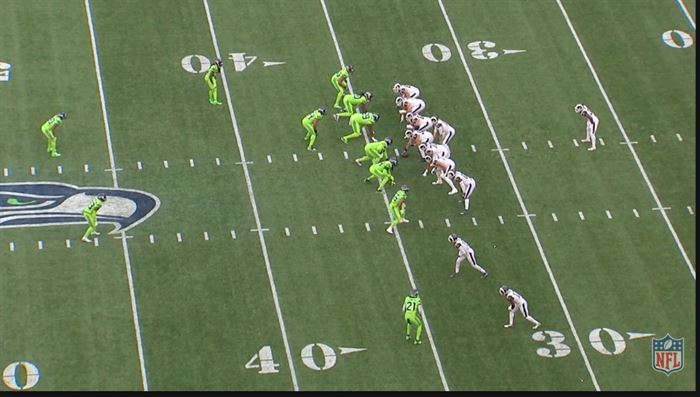 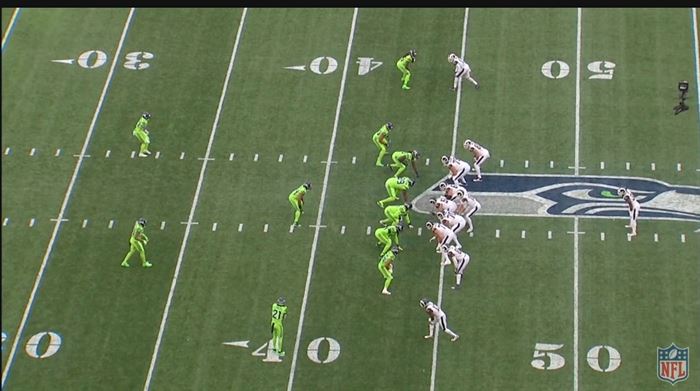 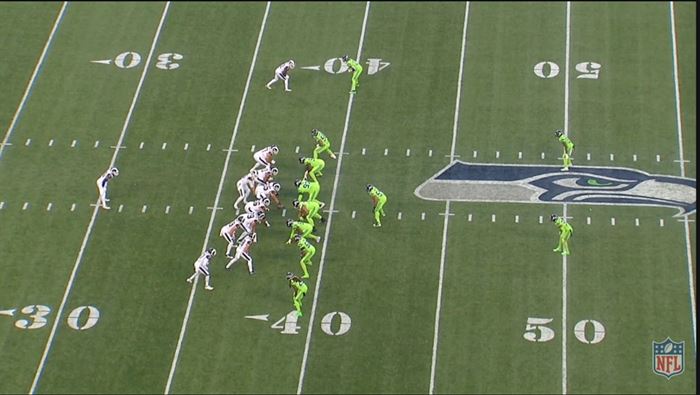 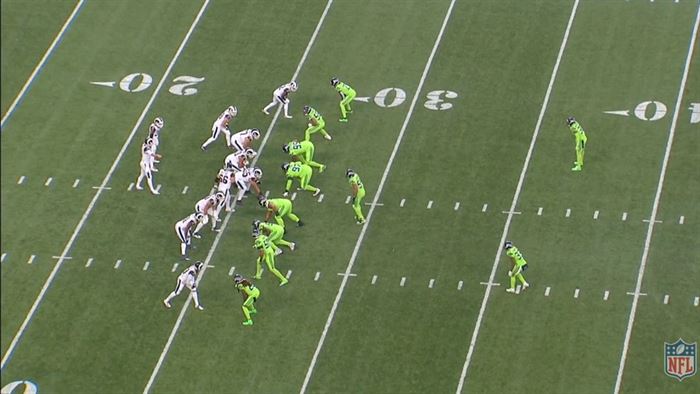 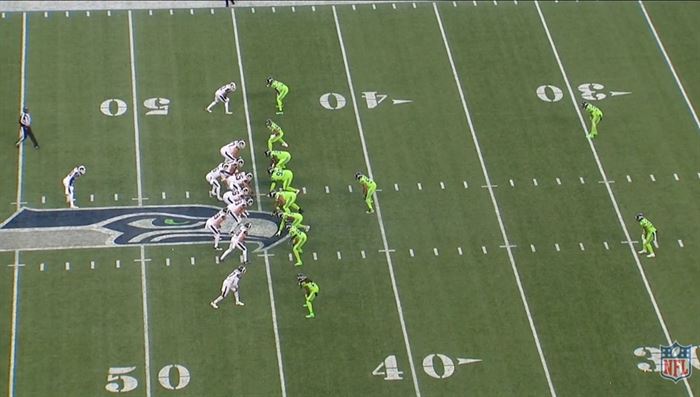 Superstar
Re: Those Loaded Defensive Fronts
POST #2
What’s the best counter?
I’m thinking if you hit a home run on a run up the middle, that might make them think twice?

Superstar
Those Loaded Defensive Fronts
POST #3
Hacksaw_64 liked this post
I think there has to be some man on man blocking “rules” when they crowd the LOS like that. Maybe it’s time we run a power running game with power G and inside traps out of 12 personnel. And “measure dicks”, so to speak. Best your man one on one and get some help from pullers and trappers to open holes between the tackles. Ya, it’s old school but so what. The play action can be designed off that as well and become very explosive. As will the bubble screen game and the counter run/toss game. The online just has to get those 6 defenders all moving laterally before they can gap shoot. Traps, pulling guards, and counter plays can work well as long as the boys get a hat in a hat and get them moving either laterally or backwards.

Over simplified but I think it would work and work well.
RFU Season Ticket Holder
1

That seems to be the "Question" with no answer.

Its been well documented what's going on. Frankly I'm sick of hearing and reading about it.

It's time to hear/see a solution. You've got all the film and the experts telling us what's wrong. If they are such experts why not offer some counters.

And McVay, what's up with him? He should be able to counter anything they throw at him.

Maybe our brilliant young HC is not such a genius afterall?

Dick84 wrote:What’s the best counter?
I’m thinking if you hit a home run on a run up the middle, that might make them think twice?

yeah, that would be one way, and my guess is mcvay has been trying to do just that without much success... when i look at those fronts it's so hard not to notice all of the real estate in the middle of the field, you would think attacking that area with short passes would help move those guys off of the los, no?

prob is mycvay often does this against these fronts, sends guys deep with little to no help underneath:

when he should be doing a lot more of this (imo), quick slants:

speaking of these fronts, i don't think goff critics fully appreciate what he's asked to do in mcvay's system, mcvay's hi lo system, i mean look at this play for example, absolutely no safety valve underneath, all wr running 10-15+ routes, goff throws a dime on this play with a ton of pressure in his face, but talk about a low percentage pass play:

as far as what to do against these looks when running the ball, who knows, a start might be spreading the wide recivers out, beyond the numbers, instead of bunching them next to the oline so often, but that of course creates another problem in that the rams wr are asked to run block a lot from the bunched formations, so again who knows?

one thing is for sure, the rams can't keep banging their run game heads against the wall when facing these fronts, or at least i wouldn't think so, 'cause it's often an ugly look:

Superstar
Re: Those Loaded Defensive Fronts
POST #6
Let’s take your moving away from tight bunch to moving outside the numbers a step further. I think and effective technique would be to line up tight bunch then shift away from the formation late in the play clock. With the snap immediately after bing set. Possibly Confusing/slowing down the D front and taking advantage with those quick slants and seam hitters. Also, if the D moves out to cover/match up with the outside the numbers shift, you can run off tackle and behind that shift. If I had time (just became a new father Wednesday!!) I would try to draw something up.

Damn A1, would love to do a film sesh with you where we could use the “telestrator” to diagram ideas. McVay would probably laugh his ass off if he saw, but it would be fun.
RFU Season Ticket Holder

ramsman34 wrote:Let’s take your moving away from tight bunch to moving outside the numbers a step further. I think and effective technique would be to line up tight bunch then shift away from the formation late in the play clock. With the snap immediately after bing set. Possibly Confusing/slowing down the D front and taking advantage with those quick slants and seam hitters. Also, if the D moves out to cover/match up with the outside the numbers shift, you can run off tackle and behind that shift. If I had time (just became a new father Wednesday!!) I would try to draw something up.


you know what's interesting about that ramrams34? at times the rams will run trips against 6-1 fronts with the slot and one wr bunched near the oline and the other wr split outside the numbers, only to have the split guy go in motion towards the los, bringing his defender with him, and then snap the ball when he reaches either the near or far side of the oline, and then try to run the ball between the tackles, i.e. the rams motion the split so he can become a run blocker, but all that really happens is the split guy just brings another would be tackler closer to the play, to the party, it's so weird to watch.

anyway, as @dick84 mentioned, popping a rb through the line on an inside run with just a single (or no) lb at the second level, and dbs playing quarters against the deep crossing routes mcvay likes to run, would be an awesome sight, but the rams just can't seem to penetrate the fronts (altho they did have a bit of success on the opening drive against the hags).

anyway, sure would be nice to see the rams figure it out, and it will be interesting to see how the niners defense will attack the rams, stick with their 4-3 or show a lot of loaded fronts as well.

Superstar
Those Loaded Defensive Fronts
POST #8
aeneas1 liked this post
I think to attack the middle against 6 DL, they have to go more man/power in order to create lanes. The trap game can work but it is based a lot on precision - right now that might be outside the current scope of the o line. There has to be tendencies with these 6 man fronts, plenty of film so exploit those tendencies. There are only so many gaps after all. Find a way to attack the weak player(s)and cut off/eliminate the remaining nearest defender(s). It’s like a zone cut off block executed with man concepts. No sliding to the lbs but rather blowing guys off the LOS at the point of attack and cutting off any linear pursuit for the remaining DL. Must eliminate penetration and then the RB has the single backer, 1 on 1. The secondary, by rule, plays pass first. Use the WRs to take them out of the play. So the key to the design is making the entire D have to guess pass or run - by formations and tendencies Pre-snap. Post snap, WRs have to drive the route stem to sell pass. Then they can stalk-block once the RB gets to the second/third level.
RFU Season Ticket Holder
1

Hall of Fame
Re: Those Loaded Defensive Fronts
POST #9
McVay's a smart guy. You gotta think at some point he will figure out how to beat that front. Quick hitting run plays up the middle? Slants where the ball comes out quicker? TE's over the middle?