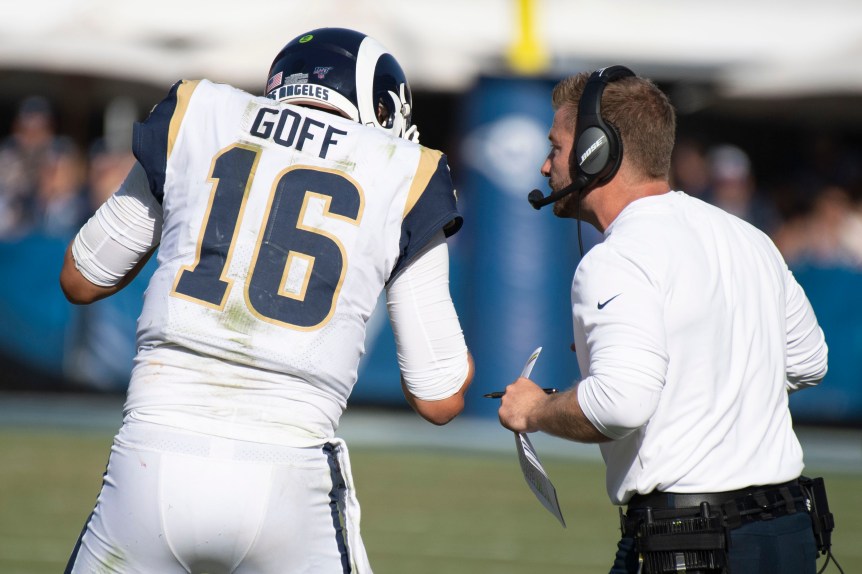 Rams coach Sean McVay, right, has been dialing up the pass-play calls for quarterback Jared Goff, left, during the first five games of the 2019 NFL season. The Rams are tied with the Atlanta Falcons for the league lead in passes attempted with 222. (Photo by Kevin Sullivan, Orange County Register/SCNG)

THOUSAND OAKS — The Rams’ passing game brings to mind the old joke about the math-challenged discount store owner who loses money on every sale but says he makes it up in volume.

By most measures of passing-attack effectiveness, the Rams are below the NFL average this season, a lot less efficient than they were last year. Yet they keep throwing, nearly 45 pass attempts a game, selling more of an unprofitable product.

Jared Goff sounds as if he wishes he could keep flinging the ball around the field, but knows an imbalanced offense isn’t ideal.

“Obviously, as a quarterback, you love throwing the ball,” Goff said this week. “But you do know — especially in the NFL — it’s not the best recipe for success to be throwing it so many times.”

The Rams (3-2) might wish to pass less and run more in Sunday’s game against the San Francisco 49ers (4-0), since the Niners have been the league’s hardest team to complete a pass against, led by cornerback Richard Sherman and defensive ends DeForest Buckner and Nick Bosa.

But they might not be able to. Rams running back Todd Gurley is uncertain to play Sunday after bruising his left thigh in last week’s loss to the Seattle Seahawks. If Gurley (4,817 career rushing yards) is out, the rushing workload falls to Malcolm Brown (628) and rookie Darrell Henderson (0). So the ground game could continue to shrink.

To hear the Rams tell it, passing more wasn’t the plan for this season. They say they’ve been forced into it, mainly because they’ve trailed nearly half the time in their past three games, including almost all of the Sept. 29 loss to the Tampa Bay Buccaneers.

“We’re throwing the ball because w’re trailing in games and have to play catch-up, because we have to. It’s not what we want to do,” said Robert Woods, one of eight Rams who have caught Goff’s passes this season.

While it’s true the Rams have thrown a lot when they’ve trailed, they’ve also done it early in games when they’ve been tied. In Rams drives while the score is still 0-0, they’ve thrown 26 times (15 completions) while running 12 times, actually a slightly higher pass-to-run ratio than in the rest of those games.

Goff’s 68 pass attempts (third most for a single game in NFL history) while nearly pulling off a comeback against Tampa Bay are a big reason the Rams have thrown 222 times, tied with the Atlanta Falcons for most in the league in 2019.

But even if you ignored the Tampa Bay game, the Rams would still have more passes per game than all but six other teams. (And those six other teams are a combined 10-19-1.)

They’re passing more than they did in 2018 and far more than in 2017, when Gurley was rushing to the NFL Offensive Player of the Year Award.

Maybe it’s because they’re throwing so much — not always in ideal situations — that Goff’s passing statistics have almost all trended downward. The quarterback with the league’s largest guaranteed contract has its 25th-best passer rating, when it was seventh best last season.

San Francisco coach Kyle Shanahan sounded as if the 49ers are preparing for the best version of whatever the Rams show on Sunday.

“They seem to get about 500 yards every game and almost 40 points every game, so it seems like regardless how they do it, to me, it doesn’t matter,” Shanahan said of the Rams, who average 413 yards (fifth in the league) and 29.2 points (sixth). “Whether you’re throwing it or running it, it’s just good offense. They have the scheme and they have the players to do either one.

“I’m sure it will balance out a little bit more for them as the year goes, like it does for most people. I don’t see that as a negative for them, I see that as a positive. They are hard to deal with in the pass game, and everyone knows how good they’ve been at running the ball and how good their backs can be.”

Rams passing-game coordinator and quarterbacks coach Shane Waldron said balance is a goal, but that this can change depending on what an opposing defense permits.

“We’ve got to keep doing a good job of staying the course and trusting the process over the results,” Waldron said.

“Obviously, moving forward we don’t want to throw the ball 50 times every game,” he said. “But if that’s what happens, and that’s the way we have to do it, I’m good with it.”

Todd Gurley said his thigh was “getting better” but offered no assurance Thursday afternoon that he’ll be able to play Sunday against the division-leading 49ers.

Like Gurley and cornerback Aqib Talib (ribs) were listed as non-participants in practice, and Rams coach Sean McVay said both are day-to-day.

More precise updates on their fitness weren’t possible because the Rams skipped a full, outdoor practice on a day of high winds. They held a walk-through indoors on what McVay called an “above-the-neck day,” meaning more study than running around.

This, combined with their short week before the Thursday game in Seattle, means the Rams have held only one full practice since the Tampa Bay game on Sept. 29.

If Talib is out, Troy Hill would start at cornerback, defensive coordinator Wade Phillips said.

Gurley wore a T-shirt with a message about college sports’ governing body to his weekly press conference Thursday. It showed “NCAA” standing for “Not Concerned About Athletes.”

Gurley said he saw “both sides of it” in his college career Georgia, where he was suspended by the NCAA in 2014 for taking money for autographs and memorabilia.

Gurley commented on the law signed by California Gov. Gavin Newsom Sept. 30 to allow college athletes to profit from endorsements.

“Obviously, everyone has their own opinion, but I’m always for the athletes to be able to make some money off of their name for sure and their likeness, because they deserve it,” Gurley said.

He joked that the California law wouldn’t have affected him.

“I was fine,” Gurley said, laughing. “That’s why I got suspended in the first place.”

In 2014, Gurley was suspended four games by the NCAA for accepting $3,000 to autograph memorabilia for multiple dealers over a two-year period as a player at the University of Georgia.
RFU Season Ticket Holder 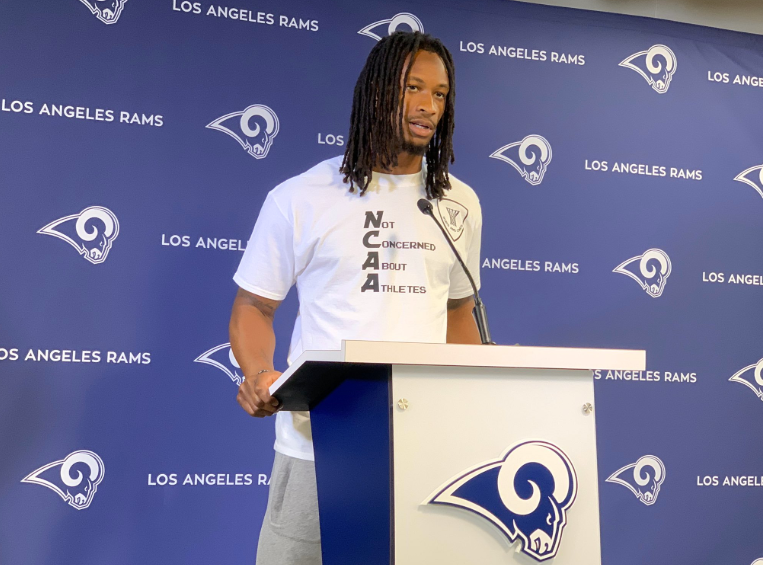 Superstar
Re: Rams passing more, but less effectively, as they face tough 49ers defense
POST #3
The miners are coming of a bye then being very physical against the browns. We are coming off a physical loss and have had almost ZERO full speed/game-like practices since the Bucs game. Above the neck stuff is great. But with no Gurley, I have a feeling another slow start is in the making. And that is not good against this team. That pass rush will be a big problem if the Rams fall behind.
RFU Season Ticket Holder

Hall of Fame
Re: Rams passing more, but less effectively, as they face tough 49ers defense
POST #4
I don't know what to make of the 49ers. They look good right now. But their opponents are a combine 5-15. Comparing our common opponents they've fared much better than we have. Then again, the NFL is week to week when it comes to how well an opponent plays. Jameis Winston can be very bad or very good from game to game. He was very bad against the 49ers and very good against us.

So the question is, are they really a top 5 team? Or will they start to level off when competition is better? This game is going to tell us a lot about both teams. I know the 49ers are a better team this year. How much better is still in question.

snackdaddy wrote:I don't know what to make of the 49ers. They look good right now. But their opponents are a combine 5-15. Comparing our common opponents they've fared much better than we have. Then again, the NFL is week to week when it comes to how well an opponent plays. Jameis Winston can be very bad or very good from game to game. He was very bad against the 49ers and very good against us.

So the question is, are they really a top 5 team? Or will they start to level off when competition is better? This game is going to tell us a lot about both teams. I know the 49ers are a better team this year. How much better is still in question.

As much of a mystery that the 49ers are, the real question is who are WE? You are spot on that this game should answer both those questions to a sizable degree.

I keep thinking that McVay is methodically figuring out all his counters to the defensive counters made against the first 2 years of his offense. He and it are slowly adapting and growing. He is doing this while managing young players in the midst of the o line turnover, injuries, a defense that is incredibly inconsistent, and some level of uncertainty with TG. So my gut tells me that he is trying to weather the storm while staying ahead of the chains schedule-wise and is hopeful the team is at least 5-3 at the bye. I believe/hope/pray that after the bye the identity of the 2019 Rams will be solidified and they will start systematically dismantling their opponents. That is how I think McVay is working on this, philosophically.
RFU Season Ticket Holder
Reply
5 posts Feb 25 2020
TAKING L.A. RAMS FANDOM TO A NEW LEVEL