RAMS FANS UNITED
WE NOT ME
7 posts
Reply  QVIEW

Administrator
PFF 2021 Oline Rankings
POST #1      TOPIC AUTHOR
We all know how random their ranking can seem and they're a bit confused on who our center is likely to be but here you go (all 32 at the link):

7. KANSAS CITY CHIEFS
The biggest story of the offseason in Kansas City was the overhaul of the offensive line. The Chiefs finished 11th in our final offensive line rankings for 2020, but that was prior to their injuries and rough finish to the season in the Super Bowl.

The overhaul started with the releases of long-time tackles Eric Fisher and Mitchell Schwartz, who formed one of the best duos in the league. The Chiefs traded for Ravens starting tackle Orlando Brown Jr., essentially giving up a first-rounder in a big exchange of picks. Brown has been a top tackle since being drafted in the third round in 2018, grading out at 77.8 overall in 2020, good for 26th among tackles. He’s improved every year and done his best work in pass protection, though there’s a big change in scheme coming from Baltimore’s run-heavy attack.

Mike Remmers returns at right tackle, where he posted a solid 71.3 grade during the 2020 regular season, good for 41st among tackles. While that performance is in line with much of Remmers’ career, he also endured two subpar seasons in 2018 and 2019, so he’s a mid-level option at the position.

The other big splash by the Chiefs was signing left guard Joe Thuney to a monster contract in free agency. Thuney has developed into one of the NFL's best guards, ranking in the top 10 in each of the past three years.

Right guard will be a battle between Laurent Duvernay-Tardif, who opted out in 2020, and the unretired Kyle Long, who we last saw grade at just 38.0 on 250 snaps in 2019. Duvernay-Tardif ranked 50th out of 87 qualifiers in 2019 in PFF grade, while Long was one of the better guards in the league throughout much of his career before injuries hurt his performances in 2018 and 2019.

The Chiefs brought in Austin Blythe to play center after he recorded a 70.3 grade for the Rams last season, 10th-best among centers. He’ll battle second-round pick Creed Humphrey, a three-year starter at Oklahoma who finished with the eighth-best grade in the nation last year.

Kansas City has also built up impressive depth, drafting guard Trey Smith in the sixth round this year and tackle Lucas Niang in the third round in 2020. Niang could be in the mix at right tackle.

After completely re-shaping their offensive line, the Chiefs now field one of the best combinations of high-upside starters and depth in the NFL.

8. LOS ANGELES RAMS
Last year at this time, we were trying to figure out how the Rams' offensive line fell so flat in 2019. Regardless, the unit rectified things in 2020 and finished third in PFF's final rankings.

Left tackle Andrew Whitworth is still going strong, even at 39 years old heading into the 2021 season. He graded out at 86.8 last season, the sixth-best mark in the NFL, though he did miss seven weeks of action and struggled in the playoff loss to the Packers. Whitworth is one of the best tackles of his generation, still performing at a high level when many of his peers have been retired for years.

David Edwards had a strong second season at left guard, grading out at 70.5 overall — 18th-best among guards. Right guard Austin Corbett experienced the classic third-year breakout en route to a 73.4 overall grade that ranked 11th in the league. He still has room to improve in pass protection, where his 61.5 grade ranked just 43rd.

Brian Allen returns as the starting center. We last saw him in 2019 when he graded out at just 58.6 overall, including a 45.4 grade in pass protection. He’s replacing the departed Austin Blythe, who was solid in 2020.

The Rams have the pieces to rank as one of the league’s best offensive lines as long as they stay healthy.

Trent Williams showed no rust after missing 2019 and finished with the highest grade among tackles in 2020 (91.9). It’s the third time Williams has graded at the top of his position, with his previous best finishes coming in 2013 and 2016. He is the best run-blocking tackle in the game and allowed only 19 pressures on 562 pass-blocking attempts last year.

Right tackle Mike McGlinchey is right there with Williams in the run game, as his 91.3 run-blocking grade ranked second last season. Since entering the league in 2018, McGlinchey has the third-highest percentage of positively graded run blocks, but he ranks just 35th in pass-blocking grade.

Left guard Laken Tomlinson is coming off a career-high 78.8 overall grade, 10th-best at the position. He’d posted consistent 66.0 to 69.0 grades in his three previous years as a starter with the 49ers, and his best work came as a run blocker, where he earned an 80.9 grade.

The other guard spot is a question mark. Second-rounder Aaron Banks is the favorite to win the job, though. He is a big-bodied guard who posted a mid-level run-blocking grade on zone runs in his Notre Dame career.

There’s a new look at center, as well, as Alex Mack reunites with head coach Kyle Shanahan. Mack is an outstanding zone blocker and a great scheme fit, but he’s coming off the lowest grade of his career (65.9). He may not be able to handle power players as he once could, but if Shanahan can tap into Mack’s strengths, there could be a huge payoff.

10. DETROIT LIONS
It's fair to be optimistic about Detroit building one of the best offensive lines in the NFL.

Left tackle Taylor Decker is coming off career-highs in overall grade (82.0) and pass-blocking grade (85.8) while ranking 12th overall among tackles last season. He’s ranked above average in both pass blocking and run blocking since entering the league in 2016.

The Lions will trot out rookie Penei Sewell at right tackle after drafting him with the seventh overall pick. He was the top offensive tackle on the PFF draft board. Sewell posted the highest grade we’ve seen from a true freshman and the highest overall grade for any offensive tackle since 2014 prior to his opting out of the 2020 season. Sewell has the tools and production to become one of the better all-around tackles in the league very soon.

Center Frank Ragnow has improved in all three of his NFL seasons, headlined by an 80.3 grade last season, the third-best mark among centers. Ragnow allowed half as many pressures last season as he did in 2019 on just about the same number of snaps.

Guard is the biggest question mark for the Lions’ offensive line. 2020 third-rounder Jonah Jackson started at left guard last year, but his 57.0 overall grade ranked just 58th out of 84 qualifiers. Jackson showed plenty of potential as a pass protector in college, so the hope is that his 67th-ranked 51.2 pass-blocking grade will improve. Halapoulivaati Vaitai is the starter at right guard, where he performed well on 282 snaps a year ago. Vaitai has spent most of his career at right tackle, but his power is a better fit at guard, which should mitigate some of his pass-blocking woes.

The Lions appear to have built the foundation of an excellent offensive line for the foreseeable future.

Despite the low run-blocking grade, the Cardinals' line has excelled at creating yards before contact, generating the third-highest EPA per play on runs last season (0.07) in large part due to quarterback Kyler Murray’s rushing ability.

Left tackle D.J. Humphries enjoyed a breakout 2020 season, ranking fifth among tackles in overall grade (88.3) to go with the No. 3 run-blocking grade (90.8). He’s become a run-game weapon, both at the point of attack and out in space, and he had the highest percentage of positively graded run blocks among tackles last season. Right tackle Kelvin Beachum re-signed as a free agent after ranking 27th in pass-blocking grade last season. He epitomizes the quality, league-average tackle.

Left guard Justin Pugh and right guard Justin Murray profiled similarly last season, as they both ranked among the top 16 guards in pass-blocking grade. However, Pugh ranked just 38th with a 62.7 run-blocking grade, and Murray’s 45.6 mark was the sixth-worst in the league.

At center, the Cardinals look much improved after adding Rodney Hudson, perhaps the league’s best pass-protecting pivot man. He’s coming off the lowest pass-blocking grade of his career (70.0), but he preceded that with three straight 90.0-plus grades. He allowed just 11 pressures from 2017 to 2019 before allowing 14 last season. Hudson still has plenty to offer, even as he heads into Year 11.

Max Garcia, Lamont Gaillard, Brian Winters and second-year tackle Josh Jones, who has starting potential down the road, all provide solid depth for the Cardinals, too.
RFU Season Ticket Holder

RFU Survivor Champ
PFF 2021 Oline Rankings
POST #4
pff ranked last year's rams offensive line 3rd best in the nfl, largely because of goff's low pressure rate - of course no mention was made of goff's near rock bottom average depth of pass rate or the the rams sharp reduction in 3+ wide receiver usage on 1st and 2nd downs in 2020, all of which directly drove the oline's low qb pressure allowed rate.

aeneas1 wrote:pff ranked last year's rams offensive line 3rd best in the nfl, largely because of goff's low pressure rate - of course no mention was made of goff's near rock bottom average depth of pass rate or the the rams sharp reduction in 3+ wide receiver usage on 1st and 2nd downs in 2020, all of which directly drove the oline's low qb pressure allowed rate.

Exactly. According to their metric, if a QB were to snap the ball and immediately throw it out of bounds on every pass play, the OL would receive a perfect score in pass protection.

RFU Survivor Champ
PFF 2021 Oline Rankings
POST #6
and even tho mcvay seemingly felt forced to change offensive schemes in 2020 because of the amount of pressure goff saw in 2019, i.e. lots of short underneath passes, fewer 3+ wr sets, the rams oline still graded relatively poorly in pass pro in 2020 (according to pff) - in fact it was the rams high run blocking grades that pushed the rams overall oline grade to near the top in 2020. 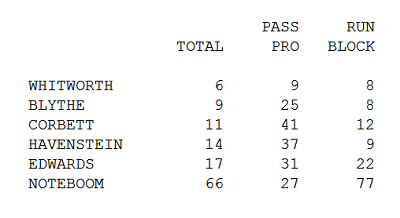 Have we solved this problem by trading for a QB who may make better/quicker decisions?

Because other than a years experience I don’t see where we upgraded.
RFU Season Ticket Holder
Reply
7 posts Jun 22 2021
TAKING L.A. RAMS FANDOM TO A NEW LEVEL