RAMS FANS UNITED
WE NOT ME
52 posts
Reply  QVIEW

BACKGROUND: Chatarius “Tutu” Atwell Jr. grew up in the Liberty City neighborhood of Miami and started playing football at four years old. He attended Northwestern High School and was a four-year starting quarterback, earning Honorable Mention All-County honors as a freshman and sophomore. After capturing a district title in 2016, Atwell as a senior led Northwestern to the 2017 Class 6A state championship, the school’s first state title since 2007. He earned Miami-Dade County Player of the Year as a senior and finished his prep career with more than 4,000 passing yards and 1,500 rushing yards. Atwell was also a member of the Northwestern track team, setting personal bests in the 100 meters (10.84) and 200 meters (22.21).

A three-star recruit out of high school, Atwell was the No. 57 athlete in the 2018 class and the No. 110 recruit in the state of Florida. He received more than a dozen scholarship offers, but only two came from Power-5 programs (Illinois and Louisville). He followed in the footsteps of Teddy Bridgewater, another former Miami Northwestern quarterback, and signed with the Cardinals, although Atwell did so with the expectation that he would move to wide receiver. His father (Tutu) played wide receiver at Minnesota (1994-97) and set the school record for catches, spending time in a few NFL camps after going undrafted. Atwell elected to skip his senior season and enter the 2021 NFL Draft.

STRENGTHS: Runs like the wind with top-end speed that looks different than everyone else on the field…dangerous vertical threat with his ability to consistently win over the top…shows one-step burst to quickly release or separate in his route breaks…effective with his double-moves…tracks the ball well over his shoulder, slowing or accelerating as needed…big-play threat with the ball in his hands (only Alabama’s DeVonta Smith had more yards after catch in 2019)…destroys pursuit angles as a ball carrier, shifting gears and running circles around defenders…accounted for nine receptions of 50-plus yards in his career…scored a touchdown every 6.6 times he touched the football in college…led team in receptions the last two seasons.

WEAKNESSES: Vastly undersized…minimal body power and doesn’t have tackle-breaking bulk/strength…allows defenders to alter his route path by their presence or minimal contact…too many traps and body catches and too many of his targets hit the ground (15 drops over the last three seasons)…still a novice route runner…needs to flatten his routes and play with better discipline out of his breaks…hears footsteps when working the middle of the field…his desire to avoid contact as a ball carrier leads to too much east-west runs…responsible for five fumbles in college…half-hearted blocker with below average functional strength in this area…limited experience as a return man (only four punt returns in college)…lack of size leads to durability concerns — missed two games and parts of others due to a L5 S1 stress reaction fracture in his back (October 2020).

SUMMARY: A three-year starter at Louisville, Atwell lined up primarily in the slot in head coach Scott Satterfield’s offense, feasting on crossers, verticals and quick throws (jet sweeps, screens, etc.). A high school quarterback, he transitioned to receiver full-time for the Cardinals and finished his career No. 8 in school history in receiving yards (2,307) and tied for No. 5 in touchdown grabs (21). Atwell has sudden feet and playmaking speed to separate before and after the catch, racing by coverage to consistently take the top off the defense. However, he is a small target with obvious play strength limitations and durability concerns. Overall, Atwell has a skill set very similar to Marquise Brown: vastly undersized with more drops than ideal, but his speed stresses every level of the defense. He projects as a homerun hitting option outside or in the slot.

Rookie
Round 2 Pick 57 WR Tu Tu Atwell
POST #2
Hacksaw liked this post
They need a burner but they need a center even more. If a good center is not available in the third round then I’m pissed.
1 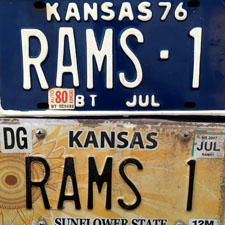 Atwell's Wunderlic Score? I think Tavon blew a 7. On the other hand Tavon was pound for pound the best blocker on the squad and didn't mind contact. Reads like Atwell is weak in this department.

If anyone had him on your draft sights please raise your hand.
1

snead's wide receiver draft picks since becoming the rams gm in 2012 (has it really been that friggin' long???) - not exactly a wr murderer's row...