i'll put our gunslinger against watson or whomever...

this bandwagon sets sail in july, get on now before it fills up!... 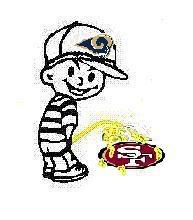 i'll put our gunslinger against watson or whomever...

this bandwagon sets sail in july, get on now before it fills up!...

PARAM wrote:Sheesh!!! So glad this is unconfirmed and possibly wrong. Otherwise, Bears NFC Champions in 2021.

Hall of Fame
Deshaun Watson is a Bear
POST #14

Hacksaw wrote:Better than the 49ers..

As I said before, the 49ers with Watson don't scare me. The number of free agents they have and would certainly lose if they traded for Watson would make SF the 2020 Texans. Entertaining from a QB standpoint but nowhere near enough to matter in the standings.

And I was being facetious about Chicago being the NFC Champs with Watson. Same situation as SF.

4 straight winning seasons. It ain't a SB win but it's better than that 7-9 bullshit. It also hasn't been seen in over 3 decades. Thanks McVay
Reply
14 posts Feb 25 2021
TAKING L.A. RAMS FANDOM TO A NEW LEVEL