RAMS FANS UNITED
WE NOT ME
13 posts
Reply  QVIEW

RFU Survivor Champ
POSTSEASON PICTURE HEADED INTO WEEK 11
POST #1      TOPIC AUTHOR
CanuckRightWinger liked this post
here's a look at the postseason picture headed into week 11... if the season ended today, the rams (6th seed) would travel to seattle (3rd seed) for round one, while the cards would travel to new orleans and the bucs to philly.

4 of the 7 teams on the rams remaining schedule have winning records (currently), only the eagles have more (5 of 7) among the current nfc postseason seeds, while the seahawks and cards only have 1 and 2 respectively (blue text = wt, i.e. winning teams (currently) remaining on schedule):

and here's a "what have you done for me lately" look at the postseason picture, how each team's remaining schedule looks based on how teams have fared since week 7... in this case the rams have only 1 team on their remaining schedule with a (current) winning record:

Hall of Fame
POSTSEASON PICTURE HEADED INTO WEEK 11
POST #2
At the risk of understating things, Monday's game is huge. For both teams.

In fact, if the Saints beat the Falcons, which doesn't seem to be a huge task, Tampa is in a more desperate situation than the Rams. Falling to 7-4 if the Saints go to 8-2 puts them out of the division race for all intents and purposes, having lost their 2 head to head matchups. The Saints play one game that should be a loss (KC) while the other 5 seem very winnable. The only concern is 4 of the last 6 are on the road, KC and Minnesota being their final 2 home games.

If the Rams should lose to Tampa, they can always climb back into a tie with Seattle via another head to head win which would also give them a tie breaker over the Seahawks. It's a tough ask but it can be done. Better to beat Tampa and reach a tie with Seattle after 10 weeks. It would give the Rams a little wiggle room with the 5 opponents not from Seattle over the last 6 weeks.

It is time for the Rams to put a complete game together offensively. Use all three running backs. Go deep a few times. Put up 30+.
4 straight winning seasons. It ain't a SB win but it's better than that 7-9 bullshit. It also hasn't been seen in over 3 decades. Thanks McVay

That would be a wonderful way to wake up in the morning. Rams at #1!
2

yep, we would own the best conference record... 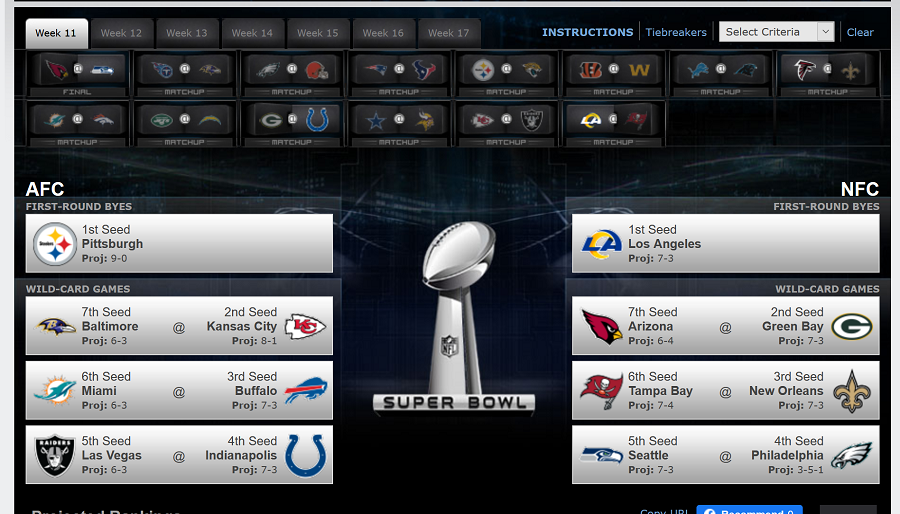 RFU Survivor Champ
POSTSEASON PICTURE HEADED INTO WEEK 11
POST #6      TOPIC AUTHOR
here's a look at 538's postseason prediction model results throughout the season... so, for example, before game 1 their model gave the rams a 49% chance to reach the playoffs, a 23% chance to win the division, and a 3% chance to win the super bowl... as today the rams chances are 77%, 31%, and 4% respectively according to their model... 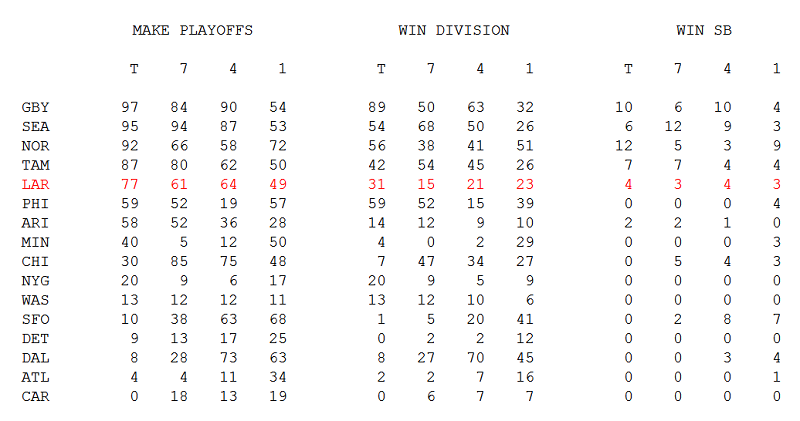 But this regime has a different feel to it. In the 60's George Allen couldn't win the big one but both playoff years we lost to a SB team. In the 70's Knox had 4 shots to win 1 game to get there and couldn't. Then in 79 when it didn't look like we'd even make the playoffs we got to the Superbowl with Malavasi's defense. I still say to this day, if the Steeler players were honest, that's the only SB they felt they might lose. In the 80's Robinson couldn't get us there but he had two chances and each time the SB champ beat us.....soundly. Finally, an out of nowhere juggernaut got us that elusive Lombardi and we thought we had a dynasty. Hell the players thought they had a dynasty. But we got beat by a dynasty and it was downhill fast from there.

Now these guys get us to the postseason in their first two years (together), get us to the Superbowl and then miss the playoffs by one game in the third year. Now, in the 4th it's looking like we gonna get back to the tourney and nobody is really looking at the Rams as a "contender". But today I heard Kyle Brandt (GMFB) say, "watch out for the Rams. They have the best defense in that division and frankly, it's probably the best defense in the NFC. I gotta figure Sean McVay is going to figure out something offensively and.......". Might we be able to get there? Two in the first four years would definitely be success.....as long as they win one.
4 straight winning seasons. It ain't a SB win but it's better than that 7-9 bullshit. It also hasn't been seen in over 3 decades. Thanks McVay
1

Rookie
POSTSEASON PICTURE HEADED INTO WEEK 11
POST #8
Great Post PA.Great memories. One SLIGHT correction. Knox had 3 chances to get to the big game with 1 win, not 4.
Proud Supporter Of Los Angeles/St. Louis/Los Angeles Rams Football Since 1974, In Beautiful Brooklyn, NY.

mike schad 1st rd wrote:Great Post PA.Great memories. One SLIGHT correction. Knox had 3 chances to get to the big game with 1 win, not 4.

Right. My bad. Malavasi had 2 not just the one when we got there.