RAMS FANS UNITED
WE NOT ME
37 posts
Reply  QVIEW

Hall of Fame
NEW UNIFORM MIX AND MATCH?
POST #1      TOPIC AUTHOR
R4L liked this post
assuming the rams eventually add yellow jerseys to the mix, here are the color combos we could see....

Undrafted Free Agent
NEW UNIFORM MIX AND MATCH?
POST #6
Elvis liked this post
According to Uni Watch, a Rams spokesperson said the off-white jerseys will only be paired with off-white knickers, and vice versa.

I would echo what Elvis said: the gradient stripe kills the idea of blue pants w/ off-white jerseys.

According to the Rams spokesperson, they are avoiding a “home” and “road” designation. My guess is that’s because the stadium will be an oven for day games in September and early October, and the Rams want to keep opponents in colored jerseys during those games.

Also keep in mind that the only piece of the uniform subject to the Five Year Rule is the jersey, due to retail concerns. The Rams can add or change knickers, socks, helmets as often as they’d like.
1

Practice Squad
Re: NEW UNIFORM MIX AND MATCH?
POST #8
Ramsdude liked this post
The Blue and Bone jerseys should be paired with yellow pants always.

I hate the Blue on Blue and the Bone on Bone.

The Rams are doing everything they can to make these uniforms intolerable.
1

Phil wrote:I hate the Blue on Blue and the Bone on Bone.

for some reason the rams seem incredibly proud and excited about the bone, it's so odd to me, it's as if they think it's a football first, light gray uniforms, something the world has never seen before... sofi has a silver/light gray look to it, is that the connection? 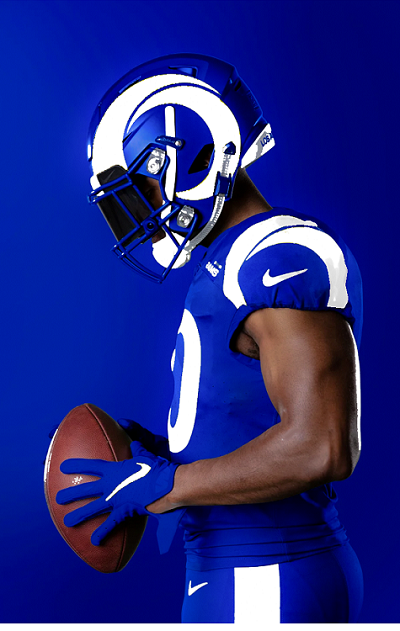