BACKGROUND: A four-star cornerback recruit out of high school, David Long was a wide receiver and cornerback at Loyola and also ran track, posting a personal-best 10.67 in the 100-meters. As a senior, he recorded 25 catches for 525 yards and seven touchdowns on offense, adding 19 tackles, six passes defended and one interception on defense. Long was named a U.S. Army All-American and was the No. 7 cornerback recruit in the nation. He initially committed to Stanford during his senior season before backing off that pledge and choosing Michigan over Washington. Long chose to skip his senior season and enter the 2019 NFL Draft.

STRENGTHS: Balanced athlete to press and mirror off the line…swivel hips and sudden footwork to stay in the pocket of receivers…heady player with a natural feel in coverage, suffocating the catch point…his pattern recognition improved each of the last three seasons…aggressive long-arm to dictate the path of routes…keeps one eye in the backfield to release his man and make plays…leverages the field well as a run defender…tough, competitive and treats every rep with the same intensity…experienced on special teams…posted an impressive workout at the NFL combine, including an elite three-cone time (6.45).

WEAKNESSES: Shorter than ideal with below-average arm length…handsy at the top of routes and his physicality draws attention from officials…peeking in the backfield gets him in trouble, losing his route leverage…needs to quicken his trigger from off-coverage to drive on throws…intermittent run defender and needs to clean up his break down and finish technique…inexperienced as a nickel corner (over 88 percent of his college snaps were at outside cornerback)…unimpressive resume with lackluster tackle and interception production.

SUMMARY: A two-year starter at Michigan, Long was a bump-and-run right cornerback in Don Brown’s press-heavy scheme, getting physical at the line of scrimmage and riding the receiver throughout the route. His college production was underwhelming, but he wasn’t routinely challenged on tape. Long plays nose-to-nose in press with the lateral slide to match releases and attach himself to patterns, staying balanced with his punch and transition. While patient at the line, he tends to panic, grip and grab at the top of routes and can be manipulated by savvy receivers. Overall, Long needs to develop a more disciplined approach with his reads and contact downfield, but he is a composed athlete with hip fluidity and physical mentality, projecting best in the nickel.

Practice Squad
David Long (CB) Round 3 Pick 79
POST #7
Long is an outside CB, will move Hill down a notch. Rams have not drafted a CB in a while, sure looks like the found a good one. Can see another one coming on day 3. Draft and develop starters at that spot sure helps that salary cap down the road. 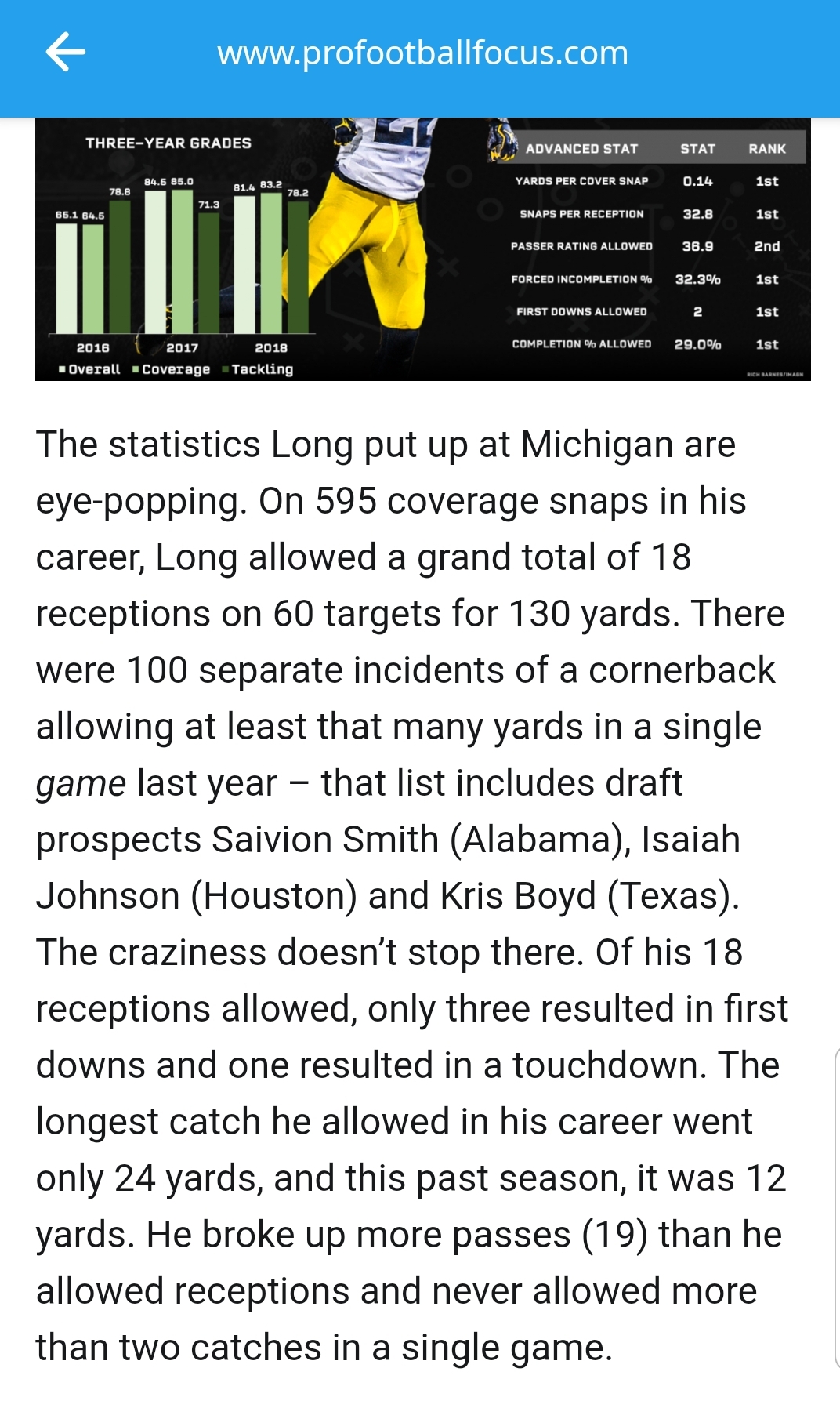