Get your survivor picks in.
CLOSE
14 posts
Reply  QVIEW

The Bears are known for a very good front D line.

I was very happy after last night’s game that our OL held up great against the Bears front D line.

RHav put OLB/Mack to bed; we didn’t hear a peep out of Mack.

And C/Allen did a fairly good job too, against the Bears interior DL, as in Hicks,

His only mistake was giving up a sack and a holding call.

But that sack he gave up, I have to blame that on Stafford, he took too long to let go of that ball, IMO

Our OL played a very good game, and gave Staff time to throw.

Our offensive skill players all played great, from our QB to our WR/TE and even RB at the end of the game to kill the clock.

But I would like to see more of a balance game of run vs passing.

The Bears had the ball 35mins vs 25min for the RAMs.

I like that we have the capability to score at will, but we should do that when our Defense causes turnovers.

Then when we get the ball back on downs or on KOs, then we should drive with basic long drives plays to kill the clock and keep the D off the field...


On the Defensive side of the ball,

We gave up too many yards in the run game, but on key moments, we played outstanding.

The INT in the end zone, and holding the Bears four times denying them from getting first downs on the Bears 4th down plays.

Our D keeping an offensive team to 14pts, in which they held an average from last season to 17pt/gm, this is a good sign.

As usual AD causing havoc causing other players on the DL to get their sacks and QB Hits,

but he had one sack and one QB hit while being double teamed all game.

I would like to see our DL put more pressure by getting sacks and QB hits.


Our point differential is +20pts sitting at the top four in the league.

Our offense is on the top five in total points in the league.

Our defense is on the top five for points against in the league.

Hall of Fame
My Assessment After Last Night’s Game Against the Bears.
POST #2
I kept saying last night, "great defense guys!!" as their RBs broke tackles and ran up yards. A little harsh? Maybe, maybe not. However, looking at the rest of the league....with the MNF game yet to be played, the Rams have the #9-t defense in yards and the #5-t defense in points. I can live with that, especially if they clean up their tackling.
4 straight winning seasons. It ain't a SB win but it's better than that 7-9 bullshit. It also hasn't been seen in over 3 decades. Thanks McVay

Pro Bowl
My Assessment After Last Night’s Game Against the Bears.
POST #3
CRamsFly liked this post
First game of REAL TACKLING.....even those Cowboy & Raider InterSquad scrimmages/practices the tackling was limited as guys "pulled their punches"
....except maybe in the brawl/melees!!!

My guess is the tackling will get crisper and more wrapped up next week and weeks following.

OTOH...
That Ram opening KO to the Left Coffin Corner.....um, hey Ram ST guys, the Left Sideline acts like a would-be tackler for us......so the Kick Returner is definitely going to his right to the Wide Side Of The Fooking Field right away with the hogbladder!!!

So why we only had one guy out there, who totally got sucked inside and gave up the Right Edge, is friggin' beyond me!!!

We know the Kick Returner is headed to his right.....so where the fook is the Cavalry, huh??!!

Moving Jalen Ramsey around, and surprisingly to me anyway......right up to the LOS, was very effective for disrupting Bear running plays eh! Ramsey is a smart football player with a great nose for the ball IMHO!

I was watching the game with ramsrams transcontinentally and we both opined that Ramsey has been giving private tutoring lessons to one David Long Jr. eh!!!

Tyler Rapp was tackling authoritatively last night I thought.....it was the middle that looked mushy, between the Bear OTs, that looked vulnerable to Montgomery's productive running. Why? I dunno.....were Kenny Young and Troy Reeder backed up too far???

OR....Is A'Shawn Robinson just not stout enough to replace the departed Michael Brokers as the interior guy who "does the dirty work to free up our other defenders?

Hopefully Raheem and Sean figure it out before the Indy game.
BTW, I watched a lot of the Seahawks-indy game, and Carson Wentz is a total dud. We should sack him a half dozen times next week if he plays as lame as he did versus Seattle yesterday!

Finally, I noticed Goff's YPA vs SF yesterday looking a lot like the old Sam Bradford numbers. Lions were helped IMO by very timely (and dumb) SF penalties and puckluck bounces late in the game to help them make it look that close. The Niners owned that game thru-out, until they got sloppy near the end. Just speaking objectively here folks.

Great first win (5 and O in Sean's Ram season openers) for McVay and his new "partner" Stafford. McVay needed a "partner/collaborator" whereas Goff was a "student". JMO.
1

Pro Bowl
My Assessment After Last Night’s Game Against the Bears.
POST #4      TOPIC AUTHOR
After rewatching the game,

I notice that DC Morris was using a lot of four man DL front. with one OLB.

Now I understand why, we are carrying seven DL compared to last season with six.

We still need more pressure coming from our front seven.

I would like to see us doubling those stats.

The more pressure we put on a QB the better the backend will play. 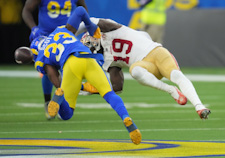 Veteran
My Assessment After Last Night’s Game Against the Bears.
POST #6

I notice that DC Morris was using a lot of four man DL front. with one OLB.

Now I understand why, we are carrying seven DL compared to last season with six.

We still need more pressure coming from our front seven.

I would like to see us doubling those stats.

The more pressure we put on a QB the better the backend will play.

An interesting related side story: the Bears WR's and their fans were continuing a narrative from last year that they owned Jalen Ramsey(he got burnt once). After Ramsey destroyed them Sunday, the WR's were bitching about the dink and dunk calls playing right into Jalen's hands. I think that was by the Rams' design.

Moderator
My Assessment After Last Night’s Game Against the Bears.
POST #7

phoenixrising wrote:The Bears got rid of the ball too quickly. I heard their average time to get rid of the ball was 2.1 sec. That's only slightly longer than it takes an unblocked OLB to get there.

An interesting related side story: the Bears WR's and their fans were continuing a narrative from last year that they owned Jalen Ramsey(he got burnt once). After Ramsey destroyed them Sunday, the WR's were bitching about the dink and dunk calls playing right into Jalen's hands. I think that was by the Rams' design.

Morris's design has Ramsey playing more like a rover. He loves the edge but Morris is putting Jalen in position to make more plays. Worked Sunday night. Hope it will going forward.
GO RAMS !!! Way to GO DODGERS !!! Way to GO LAKERS !!!
THE GREATEST SHOW ON TURF,, WAS

Veteran
My Assessment After Last Night’s Game Against the Bears.
POST #8

Hacksaw wrote:Morris's design has Ramsey playing more like a rover. He loves the edge but Morris is putting Jalen in position to make more plays. Worked Sunday night. Hope it will going forward.

Yep. And not just Ramsey. They were moving Def. players all over the place last night. OLB's were dropping into coverage more often, sometimes they were lining up as ILB's. I saw once where Ramsey played like an edge rusher and got around the OT easily but the ball was out too quick.

The RAMs O came out fast in their first series and they played pretty good the whole game.

The only mistake the RAMs offense did was giving up an INT.

It was a good balance of run to passing, 29run to 30passes. Time of possession: RAMs 28mins Colts 32min

The OL played outstanding most of the game, only giving up a sack that came from Whitworth getting beat inside. The OL pass protection stats: one sack, two TFL, 3 QB hits

The receiving corp had four drops, that should have been caught, 2 by Woods, 1 by Jefferson and one by Henderson.

Michel and Henderson combine for 99yds.rushing.

I thought they played great in the red zone. Coming up with an INT and stopped a fourth down play.

AD: Just a monster causing havoc. and not getting holding calls, especial against Nelson, this one pass play, it was obvious AD beat him inside and you can see his arm across his neck while holding AD outside underneath his shoulder pads by the arm pit... What was the Ref looking at, how could he missed that?

ST, giving up that first KO for 41yds.

Then the snap from the C hitting Nick Scott in the arm and Hekker couldn’t handle it and the Colts came up with the ball and a TD.

Tutu receiving a punt and he got lucky by not calling a fair catch, he could of cause a fumble.

This game shouldn't have been this close, except for the punting team giving up a TD. And what is wrong with Hecker? On that play, he tried (and FAILED) to pick up the ball and run with it, instead of just falling on it for a safety. In addition to that FAIL, his punts were terrible! Maybe we should have traded Hecker instead of that other punter.

Sometimes, you'll get good and bad breaks in any football game. Like a tipped pass leading to an INT, or designing a run play for Kupp when Indy had a perfect run blitz call from the edge.

I understand the effectiveness of the Rams "bend-but-don't-break until we get to the redzone" defense but they need to stop giving up those 3rd-and-15 passes for 1st down.

I hope that McVay will show us more variety in the redzone pass plays, like back-shoulder fades or jump balls to Harris.
Reply
14 posts Sep 21 2021
TAKING L.A. RAMS FANDOM TO A NEW LEVEL