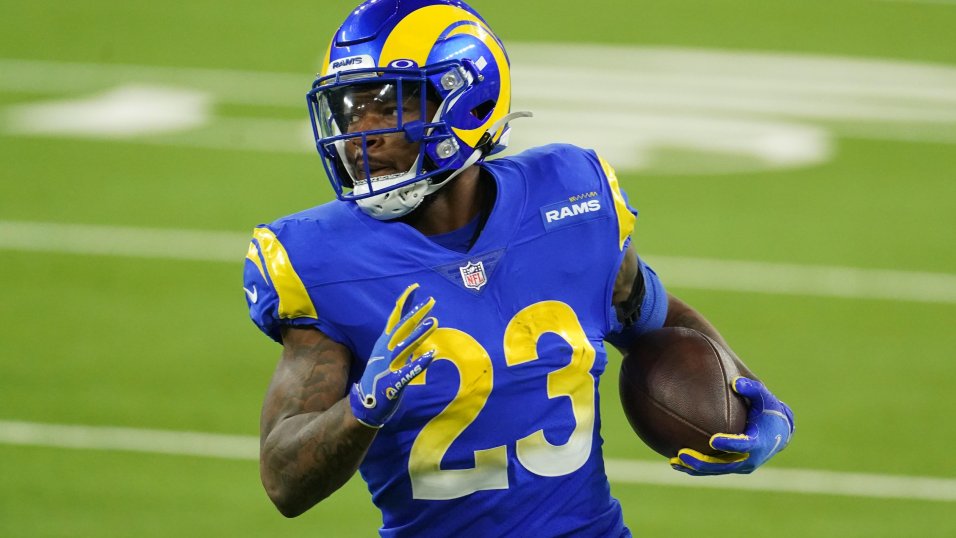 We’re in the thick of the NFL offseason and it’s officially time to start fantasy football prep. I’ll be answering the biggest questions heading into the 2021 season. Click here to read the series of questions answered so far.

There was plenty of hype surrounding Rams running back Cam Akers upon being selected with the 52nd overall pick in the 2020 NFL draft. Akers flashed high-end ability as a rusher, receiver and even as a passer while operating behind arguably the single-worst Power Five offensive line as a junior in 2019, demonstrating the sort of proven three-down readiness that can be hard to find these days.

Akers didn’t exactly have the most issue-free rookie season; injuries and backfield competition prevented him from seeing more than 10 touches in a game in all but one contest before Week 13. Luckily, Akers made the most out of his late-season push and appears ready to make big things happen in his encore, or will he?

What follows is a breakdown on just how good Akers was as a rookie as well as what we should make of his fantasy value ahead of 2021.

It’s tough to fully realize what Akers accomplished as a rookie without some context. The Rams’ starting running back in Weeks 1-2, Akers was unfortunately limited to just 27 snaps before suffering a painful rib injury. He was in and out of the lineup for the next five weeks before slowly but surely turning up the gas during November.

Through the first half of the season, Darrell Henderson largely 1) dominated backfield touches, and 2) made the most out of his opportunities. However, his success came to a rather screeching halt following the Rams' Week 9 bye, as Henderson limped to rushing lines of 7 carries-28 yards-1 TD, 8-5-0 and 10-19-0 before being severely out-snapped by the rookie for the first time all season in Week 13.

Perhaps the reduction in Henderson’s performance was due to a thigh injury he suffered in Week 8; either way, the idea that Akers only took over this backfield after the Rams’ second-year back was lost for the season in Week 17 is objectively false. In reality, Akers dominated touches and snaps alike during each of his final six games during a period that featured a fully active, albeit perhaps not a 100%, backfield during the first half of that stretch. Note that Akers suffered a high-ankle sprain at the end of Week 15 and missed the following game.

The reality that either an injured version of Jared Goff and/or John Wolford were under center during those final three games adds to the impressiveness of the production. Sure, the volume was perhaps enhanced due to Henderson being sidelined with his own high-ankle sprain, but if Sean McVay really didn’t trust Akers at this point he could’ve gone back to early-season workhorse Malcolm Brown.

Instead, McVay fed Akers a true Todd Gurley-esque role and featured him as the centerpiece of this offense. Whether the rookie was lined up in the backfield or as a wildcat QB: Akers generally did nothing other than impress with his newfound plethora of opportunity.

Yes, Akers didn’t boast the sort of asinine efficiency statistics that would take a lonely fantasy analyst from six to midnight when projecting what he could do with a full featured role. Also yes, there’s reason to believe the 2021 version of this Rams offense might just manage to leap back into the league’s top-ranked scoring units.
RFU Season Ticket Holder

So regarding the underscored, what are we missing here? I keep hearing this...
GO RAMS !!! Way to GO DODGERS !!! Way to GO LAKERS !!!
THE GREATEST SHOW ON TURF,, WAS

Administrator
Re: Fantasy Football: Is Cam Akers poised to get Todd Gurley's old workload?
POST #4      TOPIC AUTHOR
PFF, with their method of grading is higher on the Rams line than most...
RFU Season Ticket Holder

Hall of Fame
Fantasy Football: Is Cam Akers poised to get Todd Gurley's old workload?
POST #5
I’d say it’s not a homer move at all to be bullish on the Rams offense for FF: especially Akers.

Elvis wrote:PFF, with their method of grading is higher on the Rams line than most...

Are the Rams getting bumped up because they know Stafford will scramble?

Moderator
Fantasy Football: Is Cam Akers poised to get Todd Gurley's old workload?
POST #6
Seems to me this years offense has too many weapons to rely on one player like they leaned on TGII. Also if they don't install the halfback pass plays, it just won't be comparable. Cam is not Gurley and vice versa.
Then there's Hendi sharing carries. I sense the O is going to be way back.
Henry, Kamara, et al would be on my FFT radar..
GO RAMS !!! Way to GO DODGERS !!! Way to GO LAKERS !!!
THE GREATEST SHOW ON TURF,, WAS

Hall of Fame
Re: Fantasy Football: Is Cam Akers poised to get Todd Gurley's old workload?
POST #7
I do like the way Akers can one cut and go. Doesn't mess around dancing behind the line trying to find a hole. Doesn't have many negative gains.
But he doesn't have Gurley's extra gear for the long TD runs. Or the extra gear Gurley used to have before the knee wore down. Henderson might have it but I'm not comfortable with his durability.

Starter
Re: Fantasy Football: Is Cam Akers poised to get Todd Gurley's old workload?
POST #8
The more time goes by and guys we see at rb the more I realize how special TG was, no knock on Akers and Hendo but Gurley was special. The only guy I can think that Gurley kinda reminds me of is Dickerson, not physically if course but that break away speed in the open field.
The Rams have had some great rbs in their history, did Gurley do enough to be mentioned? When he was good he was very good, mvp discussion good, but when the Rams were on the biggest stages seems like TG wasn’t at his best. So where does he rank?
Reply
8 posts Aug 02 2021
TAKING L.A. RAMS FANDOM TO A NEW LEVEL