RAMS FANS UNITED
WE NOT ME
175 posts
Reply  QVIEW

Gareth wrote:Did you actually listen to this? Dickerson says “someone” - an analytics guy - told him this. NOT McVay.

Apparently not closely. I thought he was directly quoting. Glad he wasn't. Thanks for pointing that out.
GO RAMS !!! Way to GO DODGERS !!! Way to GO LAKERS !!!
THE GREATEST SHOW ON TURF,, WAS
1

Pro Bowl
Re: Mike Silver on Goff/McVay
POST #142
69RamFan liked this post
Dickerson is a moron. I don't know why ESK keeps him around.
1

Hall of Fame
Mike Silver on Goff/McVay
POST #143
I don't care who he puts under center. Until he fields a competent OL, he's gonna end up being mad at whoever is getting sacked and throwing picks. Goff's failure is a direct result of McVay's failure. Once we lost the 2017-18 OL, nothing has been the same. In the beginning we heard this bullshit coachspeak about "I have to put them in a better situation to succeed" or "I have to be better" but the bottom line is this: if you aren't protecting your assets, you're gonna get your ass handed to you when it counts the most. Now it's, he's not mobile enough. He doesn't make plays off script. Etc. Etc. Now it seems like, "I can't find 5 guys to protect him so I need a guy who moves better". Good luck with that.
4 straight winning seasons. It ain't a SB win but it's better than that 7-9 bullshit. It also hasn't been seen in over 3 decades. Thanks McVay 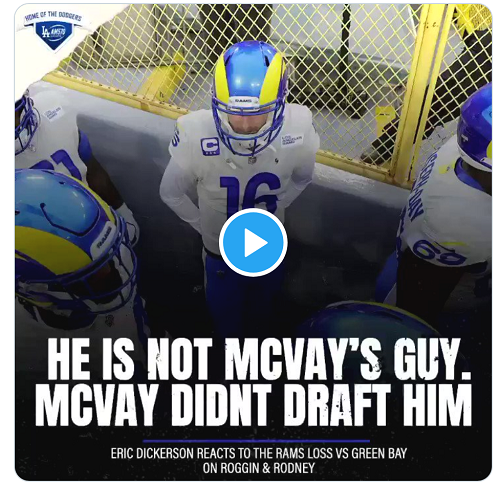 And McVay had no say on his extension??? 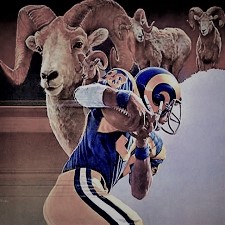 Practice Squad
Mike Silver on Goff/McVay
POST #146
Don't know about y'all, but I really don't give a fuck what Dickerson thinks.
And he's entitled to his opinion.
And, btw, his is the only jersey I own.

Cosell says issue with Goff is he can’t make 2nd reaction plays. The issue McVay is trying to resolve is that what he wants to work with going forward.
~ max ~
“The consciousness of good intentions disdains ambiguity.”
- Alexander Hamilton, The Federalist Papers

Hall of Fame
Re: Cosell on Goff...
POST #149
It said I had to sign up and give them my email. I don't want to sign up to listen to something that has been said thousands of times just from different perspectives. So we'll chalk this one up to "Oh look. Another Goff thread".

Moderator
Re: Cosell on Goff...
POST #150
actionjack liked this post
Workerd for me automatically. Basically my take away is they don't know what the Rams are going to do and that Goff may be the last pocket type QB ever taken #1 (or even high 1st round) due to that style player becoming obsolete.
GO RAMS !!! Way to GO DODGERS !!! Way to GO LAKERS !!!
THE GREATEST SHOW ON TURF,, WAS
1
Reply
175 posts Mar 07 2021
TAKING L.A. RAMS FANDOM TO A NEW LEVEL