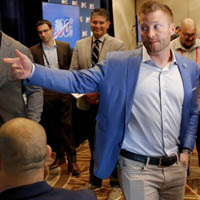 Pro Bowl
Re: Kiser to IR
POST #2
That hurts. I wonder if his injury is season ending

Hall of Fame
Re: Kiser to IR
POST #3
Well, that sucks. He's not a pro bowl caliber player but we could do worse. Not to mention the depth is a little thinner now.

Moderator
Re: Kiser to IR
POST #4
elmendorf liked this post
Reeder has made some nice plays. I like Micah. Bummer he's down.
GO RAMS !!! Way to GO DODGERS !!! Way to GO LAKERS !!!
THE GREATEST SHOW ON TURF,, WAS
1

Hall of Fame
Re: Kiser to IR
POST #6
Kiser is more than solid. There is a drop off with Reeder. Staley and the rest of the D have to make up the difference over the next few games. This is a significant loss.
RFU Season Ticket Holder

Hall of Fame
Re: Kiser to IR
POST #7
R4L liked this post
As Haden asked, I wonder what the injury is and if it’s indeed season ending. My guess is meniscus tear or MCL sprain.
RFU Season Ticket Holder
1

(On if Kiser's injury is season-ending and will the team be promoting anybody)
"So, don't expect that to be season ending. Don't expect it to require surgery. Because of the circumstances this year, just with the unlimited IRs and how quickly guys can return, that was kind of the thought process. As far as promoting somebody, do anticipate that a little bit later in the week, but because we've been able to stay relatively healthy, what we're concerned is making sure that we're able to get the appropriate guys up for our 48 (man gameday roster). Who that ends up being, we kind of have an idea, but it hasn't been determined yet, so I don't want to announce that.”

(On if Kiser will be out for longer than three weeks)
"The hope is that it's just those three games. It was something that you even debate whether or not you wanted to do it because it's kind of right in that fringe area. It is something that we'll just continue to monitor and I'll keep you posted once it gets back to where he could potentially return and see where we're at then."
RFU Season Ticket Holder

Veteran
Kiser to IR
POST #10
Hacksaw liked this post
Never understood the logic of the NFL IR system that means you are done for the year. Colossally stupid , especially given the nature of the sport.
1
Reply
17 posts Jan 20 2021
TAKING L.A. RAMS FANDOM TO A NEW LEVEL