Hall of Fame
BEARS DEFENSE
POST #1      TOPIC AUTHOR
it appears that the monsters of the midway have picked up right where they left off last season by continuing to field a stingy-ass defense.... last year the bears allowed an average of just 18.8 offensive points per game, this year it's a lowly 19.5.

in the 22 games they've played since the 2019 season, the bears have allowed a passer rating over 100 just twice, and more than 27 offensive points just once.

against the seven top 10 scoring offenses they've faced, they've allowed an average of just 22.4 offensive points, while keeping those ranked outside of the top 10 to a meager 17.3 per game average.

the good news is the bears offense has pretty much sucked, it ranked 29th last year in scoring and ranks 26th this year headed into week 7 - in fact the bears have lost a third of the games in which they've held opponent offenses to under the league scoring average, i.e. their defense got the job done but the offense failed... with trubiskly under center this year the bears offense averaged 22 points per game, with foles under center it's been 21 per game. 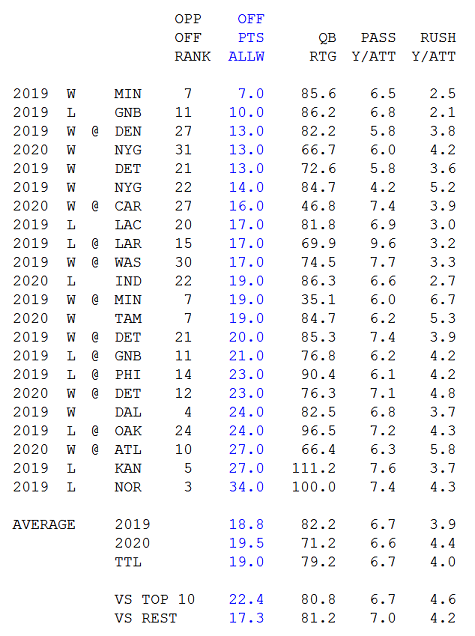 Hall of Fame
BEARS DEFENSE
POST #2
So do we:

b) pass like hell to give their offense more opportunities to screw up?

Hall of Fame
Re: BEARS DEFENSE
POST #3
Their offense might suck. But our defense does not play well in the first half. If they get out to an early lead its gonna be tough to play catch up against that defense. The way a hobbled 49er defense shut us down does not give me confidence.

i'm with snack, definitely don't want to have to play catchup with these guys, not the way they've been playing defensively.

i'm with snack, definitely don't want to have to play catchup with these guys, not the way they've been playing defensively.

I hear ya. All I'm saying is fortunately for us, our D isn't facing Green Bay and their D isn't facing the Red...WFT.
Reply
6 posts Nov 24 2020
TAKING L.A. RAMS FANDOM TO A NEW LEVEL