Hall of Fame
HENDERSON
POST #1      TOPIC AUTHOR
henderson is having a heckuva year despite ranking just 19th in carries, and it's easy to see why pff has ranked him as high as #1 out of 52 qualifying rbs at times this year, and why they currently have him ranked #2.

headed into week 7, among the 35 rbs with at least 50 carries, henderson ranks 3rd in % of runs of 10 yards or more, and 1st in % of runs that have resulted in a first down... how great would it be to see him shred the bears? 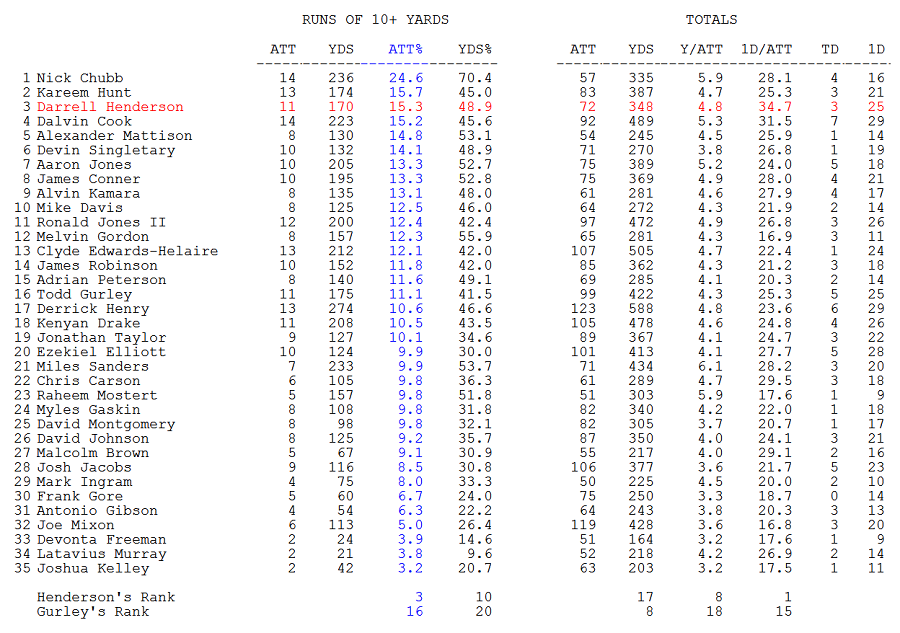 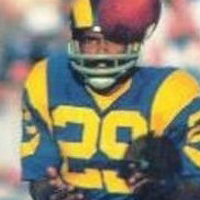 Veteran
HENDERSON
POST #2
Inquiring minds (particularly a RFU Fantasy Henderson owner) wonder why we're still operating a timeshare. And McVay's presser was interesting, where he basically told the league that we bring Brown in when we're going to pass. Also don't understand the media/fan concern about getting Akers touches.

Indrid Cold wrote:Inquiring minds (particularly a RFU Fantasy Henderson owner) wonder why we're still operating a timeshare. And McVay's presser was interesting, where he basically told the league that we bring Brown in when we're going to pass. Also don't understand the media/fan concern about getting Akers touches.

i didn't catch mcvay's presser but brown has been the rams 3rd down back, which is more often than not a passing down... henderson has been the 1st down back, he's gotten (by far) the most 1st down carries, he's also emerged as the go-to guy on 2nd down after all 3 guys seemed share 2nd carries earlier in the season.... of course akers' sitch has no doubt influenced the mix to some extent.

carries per game, per down: 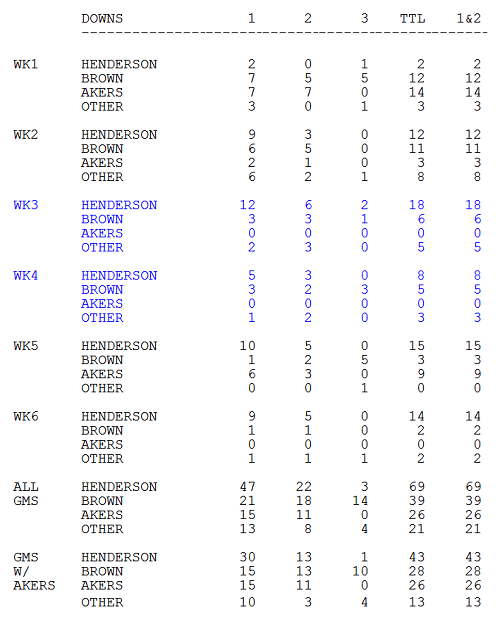 Superstar
Re: HENDERSON
POST #4
Akers is a really good back. Different than Hendo. But really good. Brown is the 3rd down back bc of his total command of the passing game as the RB - protections, blitz pick up, hot route release. Don’t think MCV trusts the other 2 like that, yet. Also don’t think he cares much that Brown says “pass” on 3rd down. All about execution.
RFU Season Ticket Holder

Superstar
Re: HENDERSON
POST #5
PARAM liked this post
I am really hoping Hendo and the run game in general goes OFF on Chicago.
RFU Season Ticket Holder
1

Hall of Fame
HENDERSON
POST #6
Those numbers seem to indicate Henderson is becoming what they thought he'd be. A big play back.

Veteran
HENDERSON
POST #8
Pissed me off when in his geniosity, my new word, McVay never threw him the ball.

Hendo is a great receiver, and they totally ignore that part of the game.

Get your head out of your ass.
Gentlemen. You can't fight in here. This is the War Room.

Veteran
Re: HENDERSON
POST #9
aeneas1, ramsrams, PARAM liked this post
It's all very predictable...and actually pretty conservative at the moment. First and 10, run Henderson or, in the case of the SF game, throw an incomplete pass and then run Henderson on 2nd and 10. Get in any behind the sticks situation and in comes Brown. Brown also takes a turn on 2-3 series a game. We used to have one of the best RB screen games in the league. Now our screen game consists of line up a bunch on third and long, throw to a WR behind the LOS, and hope for blocking and 8-10 yards of YAC.

Looking at the Snap Count thread, Henderson has eclipsed 50% once. SF game...53%. Time to give him the lead dog role (and around 70% of the snaps) and run the shit we used to do with Gurley in the hey day when he was still interested in running a route and catching the ball. Perhaps Henderson can't pass block at all, but in my game-only viewing, I don't see any evidence of that...or effort on the coaching staff's part to figure that out under live conditions.

P.S. I feel Canadian now, having got my rant on.
3