Here we go, Rams will score on every play. Reminds me of last year.

That was just too easy.
McVay is so good at the beginning of the games.

Surgical march down the field by LA. Dont think there were any drops or miscues. Just efficient playcalling and execution. It really sucks to see how competent football teams/offenses play year after year.

Imagine having McVay in your building and letting him walk

I'm still not quite sure what/why that was, but I'll take the TD.

I learned something new, I always thought the ball had to cross the line.

Our OL still getting dominated up front..

Wtf is a Tameric Hemingway?

DL gets eviscerated against the run

how do the Rams block so well in front of their players without having illegal men downfield ?

Our secondary is terrible. Stop playing the ****ing zone, these idiots don't know how to do it.

Goff has time to make the throw and bake a cake back there. defense looks so ill-prepared and confused.

We making the Rams look like it's 2 years ago.

Remember when people thought Wentz was better than Goff? That was cute.

The Rams have looked great all year excerpt last week. Think they got drunk the night before.

What a hit! Alex Smith time?

Wow. Hooray for Alex Smith! Regardless of what happens.

Didn't think we would see Smith today. Thanks to Ramsey for being a dirty prick

Given that Kyle's been running for his life, this isn't an ideal situation for Alex to come back...

My God we are such a dumpster fire.

Yeah I've never seen Donald be a dirty kind of player. Plays super hard and intense, but clean. He's no Suh. I didn't really have a problem with his hit on Alex.

"This team is going to lose the fans."

There are still fans?
I thought that most of us were still here for the comic relief?

LA took the foot off the pedal. And still dominated Washington.

Rams WR basically just standing there at a full stop downfield at the 20 in between 4 burgundy jerseys and Goff having the confidence to know the secondary won't be able to make a play, sums up this defense right now. It's a joke.

150 total offensive yards for our football team folks.
That's it.

The Rams were going to embarrasses this WFT today regardless of who was at QB. Just how it is. 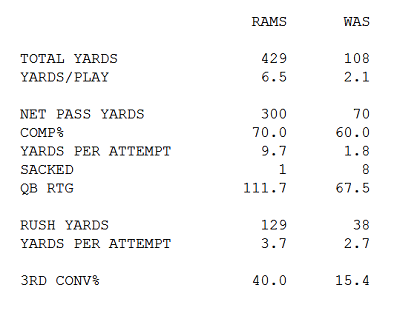 Hat’s off to Alex Smith, he did play again after 17 surgeries. He sucked, but he played.

Troy Reeder. Enjoy the game of your life. No way shape or form he starts on a good defence. Happy for him.

Henderson’s damn good catching that ball, and he makes people miss. He just looks so natural. More of that, please.

JJ is back to being JJ. Good to see.

Kitchen sink at OLB, the one constant was Floyd. That guy can play. Broke down once on contain this game, that is it. Sign me up for more.

Van fans won’t be happy, and I don’t really care. Reynolds is doing the job.

McVay managed the OL well today. Took his shots at the right time.

Favorite play was Gaines running down the WR from behind. Perhaps you won’t agree.

If the Rams are going to play a fullback, you have to have Touchdown Johnny Mundt in there.

Jalen Ramsey is a bad man. I went “ ouch”. Game was over, after that.

Darius Williams had one play wiped out by penalty, but he continues to impress.

Hope Fuller isn’t hurt long term.Seems to have a calming influence back there.

Kupp not out there for the last couple of PR’s. That is concerning.

Confidence in kicker is ebbing.

Special teams seems to be giving up a few more yards in the return game than what we are used to.

Happy Canadian Thanksgiving Day.
Gentlemen. You can't fight in here. This is the War Room.
1

Sportster wrote:Can you include the link to the actual presser?

I find reading them missing that third dimension.