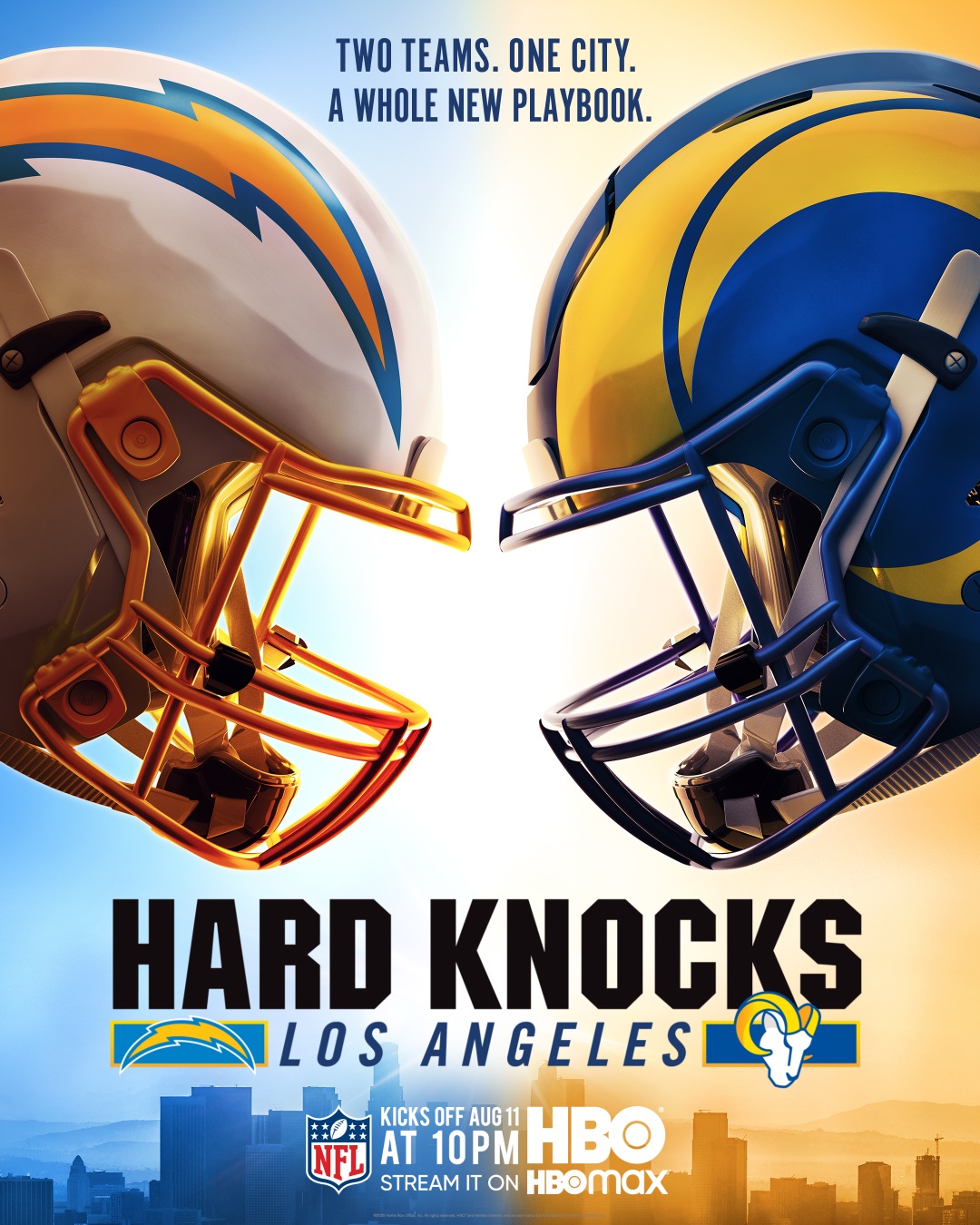 'Hard Knocks: Los Angeles' preview: What to expect this year

Dan Hanzus
AROUND THE NFL WRITER

Hard Knocks is coming back. That feels ... normal! Let's talk about it.

The 15th season of the venerable NFL Films docuseries is titled Hard Knocks: Los Angeles, and no, it's not a CBS criminal procedural your grandparents watch on Monday nights. (Far as we can tell, Joe Mantegna has zero involvement in the project.) Hard Knocks: Los Angeles is a behind-the-scenes look at the Rams and Chargers as both teams attempt to prepare for the strangest and most uncertain season in the history of the NFL.

How's that for a hook?

Before the premiere (10 p.m. ET Tuesday on HBO), we thought it might help to answer some questions you might have. Let's get to it:

The hook of Hard Knocks is access. Behind closed doors at team headquarters, on the sidelines during games, in dorms, homes and apartments with the players. How do you do any of that during ... well ... you know?

Good question. Hard Knocks has a winning formula of beats we've come to expect, and so many of those beats are simply not an option in the current climate. I spoke with Ken Rodgers, VP at NFL Films and the showrunner for Hard Knocks, who said that the logistical scramble this summer has been "maddening but also creatively inspiring." Rodgers and NFL Films had to rethink how they did everything.

"This first episode to us is starting to become a look into an American workplace going back to productivity in the midst of the biggest story in the last 100 years in American culture," Rodgers said. "It just so happens to be the industry is football, but anyone who watches this is going to recognize what people are going through.

"They're trying to figure out how to exist in this world, how to work again, how to keep each other safe, how to still earn a paycheck. Their bosses are trying to keep them safe. Everyone is still trying to continue some sort of normalcy, and everyone admits, it's absolutely, completely overwhelming and the only way they can go about it is focus on the details and concentrate on acclimation."

That sounds cool and different ... but what will we even watch during the season premiere of a football show with no football? Nostril swabs for 53 minutes? That's gross.

Tuesday's premiere won't really be a "football story" in the way we're accustomed. More traditional elements of the show won't begin to bleed back into the season for another week, with increasing amounts of on-field coverage with each passing episode after that.

"We're seeing rookies show up this week who have never met their coaches in person," Rodgers said. "They've never put on their uniforms. They've never stood in front of their lockers."

The new season will cover two teams instead of the customary one. Has that ever happened before?

(Fun fact perhaps relevant to only me: Ray Donovan star Liev Schreiber has served as narrator for every Hard Knocks season except for 2007, when Ant Man himself, Paul Rudd, jacked the mic. Maybe Liev was shooting Scream 3 or something that summer.)

I get it. The Rams are back after what amounts to an extended hiatus, and remember, they also got the season-long All Or Nothing treatment in 2016 (the series aired the following summer). That's quite a bit of coverage in a four-year stretch. On the plus side, the roster has turned over substantially since that lost 2016 season and Sean McVay sits in the big chair, a compelling alternative to erstwhile mustachioed coach Jeff Fisher -- who was last seen holding a tiny dog and waving goodbye to the team bus after being fired. It feels like everything has changed for the Rams since then, so no need to get too worked up about the return engagement.

Will the Rams and Chargers get equal love?

I'll be interested to see if one team gets more coverage than the other. If one camp is popping and the other is dull, do they still commit to a 50/50 split in terms of episode coverage? I'd say follow the entertainment. Rodgers indicated the same, but said he believed there is a generous list of compelling storylines to follow on both sides.

How will Hard Knocks handle covering both teams from a logistical angle in a COVID-19 world?

The production runs smaller than usual at each site, but it's still a monster. There will be 30 crew members with NFL Films at each camp and more than 400 hours of footage per week to cull through for the Hard Knocks editing crew. The NFL Films crew is working at 75 percent capacity at each site in relation to past Hard Knocks seasons with no pandemic-related restrictions. Of course, NFL Films itself is working at 150 percent capacity with two teams to cover. Like I said, it's a monster.

Speaking for the crew, Rodgers acknowledged it's not going to be a fun summer for Hard Knocks personnel on site. They'll essentially be in a bubble within a bubble, with little access to the outside world beyond their hotel rooms. Hope they have good internet.

For the Chargers, everyone will be plugged into the quarterback situation. For the second time in three years, Tyrod Taylor is on premium cable being talked up as the steady veteran fully capable of holding down the starting job while the first-round QB develops behind the scenes. And just like with Baker Mayfield and the Browns in 2018, you can fully expect Justin Herbert to take poor Ty-God's gig by Week 3 or so. But for now? Get ready to hear Anthony Lynn and various Chargers coaches talk up Taylor like he's the secret cosmic love child of Randall Cunningham and Johnny Unitas. That's just how this works.

Hopefully we'll learn more about Derwin James, the uber-talented safety looking to reassert himself after an injury-wrecked 2019. Then there's Joey Bosa, who just signed the biggest deal ever for a defensive player. NFL Films teased that pen-to-paper moment last week:

As for the Rams, they have plenty of star power with the likes of Aaron Donald, Jalen Ramsey and Jared Goff. I'm curious to see the interplay between McVay and new offensive coordinator Kevin O'Connell. O'Connell is McVay's first OC since 2017, and it will be interesting to see how much McVay delegates on that side of the ball. Here's McVay wearing one of those face shields that reminds you how profoundly and disturbingly weird 2020 really is.

Beyond the obvious differences, what's a traditional element of the show that we might not get this year?

The absence of preseason games and the decrease in roster size and practice time are all critical blows to the undrafted and unheralded players hoping to keep their football dreams alive this summer. For years, these long shots have served as the heartbeat of Hard Knocks. In a way, they're the audience conduit -- and it would be a shame if we didn't get to follow some of these underdogs. I'm pretty sure these guys are 90 percent of the reason why my wife watches the show.

Will Jared Goff address his dearth of understanding regarding matters of the sun?

In the first episode of the Rams' maiden Knocks journey in 2016, Goff -- then a cucumber green No. 1 overall pick -- was stumped when quarterbacks coach Chris Weinke asked the rookie where the sun rises and sets. It wasn't a great moment for the QB or his alma mater, Cal. I bet my next paycheck that this comes up in some capacity in multiple episodes.

Where can I find full recaps and analysis of each Hard Knocks episode?

Well ... um. That's me. I do that. Check in at NFL.com every Tuesday night and you'll find a full episode recap. Because I'm obsessed with this show, I'm sure I'll be talking about it on the Around The NFL Podcast as well. Hooray for content. And welcome back, Hard Knocks. You've been missed.
RFU Season Ticket Holder

Administrator
Re: No more 7-9 BS. Hard Knocks again?
POST #28
actionjack liked this post
I made a big thing out of how little Les Snead we saw in 2016. I'm curious to see if that's gonna be different this time around...
RFU Season Ticket Holder
1

Elvis wrote:I made a big thing out of how little Les Snead we saw in 2016. I'm curious to see if that's gonna be different this time around...

I imagine we will see a fair amount of Les in those Mr Magoo glasses....
Fuk the Niners and Jimmy G

Hall of Fame
Re: No more 7-9 BS. Hard Knocks again?
POST #30
Does anyone know if there's still the half day/full day delay to get stuff to streaming on HBO Go/Max?
Reply
84 posts Sep 30 2020
TAKING L.A. RAMS FANDOM TO A NEW LEVEL