RAMS FANS UNITED
WE NOT ME
348 posts
Reply  QVIEW

Hall of Fame
Is it safe to play football?
POST #111

Hacksaw wrote:They're not going to play.

Especially if this is the starting point of the players.

Pro Bowl
Is it safe to play football?
POST #112

I guess Jacksonville will have increased attendance at 25%.

Hall of Fame
Is it safe to play football?
POST #114

Seriously though, they might pull the tarps off to allow for spacing.

In the name of health and safety, NFL players could be sporting a whole new look in 2020.

The Oakley Mouth Shield -- a product designed by Oakley in collaboration with doctors and engineers from the NFL and NFL Players Association to mitigate the spread of the coronavirus on the field of play -- is expected to be distributed to all 32 teams over the next week, when it will receive a test drive on a much larger scale than it has gotten to date.

Safety protocol negotiations are ongoing between the league and players. Currently, there is no mandate to wear a face shield, but the NFL's medical experts are advocating for the use of the protective equipment.

"That's certainly what we're going to encourage," said Dr. Allen Sills, the NFL's chief medical officer. "And we hope that we're going to land on a product design that's something that everyone would want to wear, because they'll see the value and want that additional protection without any detriment to performance."

The Oakley Prizm Lens Technology used by skiers, military personnel and, most recently, NFL players for enhanced color and contrast in their visors is featured in the new design. Plastic sheets extend down and attach to the face guard. There are airways and openings on the mouth shield but none that allow the direct transmission of droplets, according to the chair of the NFL's engineering committee, Dr. Jeff Crandall.

The mouth shield has already been distributed to the Los Angeles Rams and Los Angeles Chargers -- two teams close to Oakley's home base -- per NFLPA medical director Dr. Thom Mayer, and has also been sent to various player representatives and equipment managers for feedback.

The two biggest concerns to date have been visibility and breathability, according to Mayer.

"We've only had it on a few players -- we have 2,500 players in the league -- but I was surprised that ... claustrophobia has not been an issue yet," he said. "I think it will be when we [have more players testing them]."

Houston Texans star defensive lineman J.J. Watt, for one, is firmly against the idea of wearing a face shield.

"My second year in the league I thought it'd be cool, I put a visor on my helmet," Watt told ProFootballTalk. "I was like, 'It looks so cool, I wanna put a visor on.' I had it on for about three periods of practice and I said, 'Take this sucker off -- I'm gonna die out here.' ... So now you're gonna put something around my mouth? You can keep that. If that comes into play, I don't think you're gonna see me on the field." 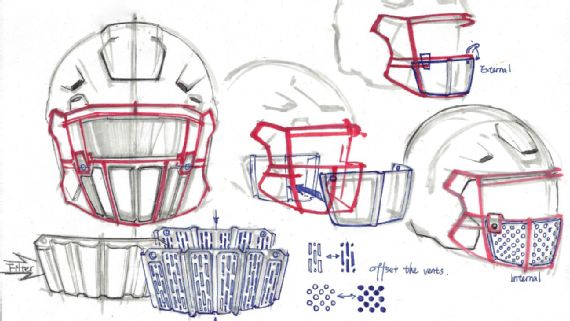 The current design, however, is the result of an iterative process based in large part on player feedback, with comfort and functionality top of mind along with protection. Quarterbacks who tested them recently were able to effectively call out plays, Mayer said, following initial responses that the sound was too muffled. There was also broad consideration given to field of view.

Crandall said that Oakley has conducted internal testing in which it has sprayed particles of fluid to represent droplets expelled by players and has seen a high success rate of blocked transmission.

"I don't know that there's a direct percentage that anyone's come up with because a laboratory is not the on-field environment, obviously," Crandall said. "There's lots of things that players do on the fields that they're not easily replicating [in] the laboratory, but it is a significant blockage to transmission of droplets. There is no straight pathway through the face shield or visor for a droplet to be transmitted."

While Oakley is the official supplier of the NFL, there are other manufacturers of face shields, and players may end up using other brands as well in 2020, according to chief revenue officer and executive vice president of NFL partnership Renie Anderson.

Mayer called football "probably the perfect milieu or petri dish in which to transmit the virus," given that it is a contact sport involving a large number of players. The NFL and NFLPA are hoping the different safety measures they are taking, including the introduction of the mouth shield, will lead to a safer environment.

"Just like everything we do, whether we're talking about better cleats or better performing helmets, it's all about something that's safer and yet also protects and in many cases enhances performance," Sills said. "That's the same mantra and the same sort of approach that we're taking here. I'm really pleased with how the work is going along. We're not at a finished product yet. Like most things in health safety, there's really no finish line here. So we're hoping to continue to innovate and improve as we go along. But we're excited about where we are and excited about the potential role this may play in risk mitigation on the field."
RFU Season Ticket Holder

Hall of Fame
Re: Pre Season Cut to Two Games - Other Changes to 2020 Season
POST #116
It’s interesting to watch phase 3 of the NHL start up and they can’t disclose anything why players aren’t on the ice. We’ll probably get the same thing with the NFL.

Administrator
Re: Is it safe to play football?
POST #117
RFU Season Ticket Holder

Administrator
Re: Is it safe to play football?
POST #118
RFU Season Ticket Holder

Administrator
Re: Is it safe to play football?
POST #119
I'm looking forward to watching this, might even bet on it:

Moderator
Re: Is it safe to play football?
POST #120
Down goes CA. Bars, restaurants, gyms, reordered to close. Not getting closer to games, with people at least.
THE GREATEST SHOW ON TURF WAS
Reply
348 posts Aug 14 2020
TAKING L.A. RAMS FANDOM TO A NEW LEVEL