dieterbrock wrote:Still taking the bait?
If everyone just ignores the trolling, it will stop

Probably good advice. I supposed I was giving him the benefit of the doubt.

The Bears were spared being cut from “SNF” in Week 11, but they still could suffer the indignity in Week 16. Plus, there are two other weeks to watch when it comes to flexing.

The Turk didn’t come for the Bears in Week 11.

Despite falling to 12th in the NFC playoff standings, the Bears weren’t cut from their “Sunday Night Football” game Nov. 17 against the Rams in Los Angeles. The Turk is the fictional creature that cuts players from NFL teams in training camp, but with the power of the No. 3 TV market behind them, the Bears were spared from its wrath.

Of course, having the second-ranked Los Angeles market helped keep the game from being “flexed” off of NBC, too. There also were few other choices for the league to flex into the prime-time slot (more on that later). So Bears-Rams it is in a game that should have happened in the divisional playoffs last season.

The Bears are locked into their next two national broadcasts, both on Thursdays: Week 13 in Detroit on Thanksgiving Day and Week 14 at home against the Cowboys, both on Fox. But they still could suffer the indignity of being removed from “SNF” when they host the Chiefs in Week 16. And they’re not the only ones at risk the rest of the way (more on that, too).

The NFL must decide 12 days before a game whether to flex (six days for Week 17 games). But it doesn’t have carte blanche. CBS and Fox, owners of Sunday afternoon packages, can block a game from being flexed each week. Those games aren’t made public, but you can safely assume the networks’ choices (they’re often the late doubleheader game). The league also grants them some wiggle room to change their pick during the season.

So the question generally becomes: Is the third-best game on the schedule better than the scheduled “SNF” game?

But there are other considerations. If a team already is scheduled for the maximum of five prime-time appearances on Fox, ESPN and NBC combined, the league can flex it in one more time. The NFL must decide when the best time is to do that. It also needs to determine how a switch would affect the distribution of the rest of the games that week. Flexing isn’t designed only to help NBC. It’s designed to put the best games in the best time slots.

Starting with Bears-Rams, here’s a look at the remaining schedule for the NFL’s game of the week, the flexing possibilities available and what the league might decide:

Aside from the game’s market advantages, it didn’t have much available competition. We can assume CBS blocked Patriots-Eagles, a rematch of Super Bowl LII. That would make Texans-Ravens, a battle of first-place teams as of now, the third-best game of the week. The problem there is that the Texans play Thursday in Week 12. Perhaps the league didn’t want to make a short week even shorter.

This week presents a fascinating situation for the league. It already has a good game in place, but it might be able to get a better one. In the second half of its doubleheader, Fox has Cowboys-Patriots and Packers-49ers. At the start of the season, you can bet Fox chose to block the former. But now the 49ers might be undefeated. To maximize distribution, the league could move Packers-49ers to prime time and Seahawks-Eagles to noon on Fox, giving each game its own window.

There’s little chance the Patriots would be flexed out. CBS’ two late doubleheader games are Chargers-Broncos and Browns-Steelers. The network likely blocked the latter at the start of the year, but that game has lost its luster. The 49ers-Ravens game on Fox has potential, but Patriots-Texans figures to stay.

CBS surely blocked Chiefs-Patriots, a rematch of the epic AFC Championship Game last season. That makes 49ers-Saints the third-best game, but Fox likely blocked that one on a weak Sunday for the network. So expect to see Seahawks-Rams.

If the Chargers don’t have a late-season run, this game isn’t appealing. Fox certainly blocked Rams-Cowboys. Its other late game is Falcons-49ers, which could be good if not for the Falcons. Bears-Packers is a possible flex because of its drawing power. Or perhaps another game becomes worthy.

The schedule for the week won’t be settled until Tuesday. Five games are TBD, and three of them will move to Saturday and air on NFL Network. The best of them is Rams-49ers. The league would benefit most knowing if flexing out of Chiefs-Bears is best before deciding when to schedule Rams-49ers. But it doesn’t have such flexibility yet. That game figures to stay on Sunday in case the Bears aren’t worth keeping in prime time. Of the games set for Sunday, Fox likely blocked Cowboys-Eagles. 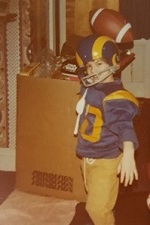 Pro Bowl
Re: SNF upcoming possible flex
POST #13      TOPIC AUTHOR
Elvis liked this post
Looks like Seattle at Rams December 8th has not been flexed out. Fox protected the Niners-Saints. Let's hope we don't get embarassed on SNF!
1

ramsfan1977 wrote:Looks like Seattle at Rams December 8th has not been flexed out. Fox protected the Niners-Saints. Let's hope we don't get embarassed on SNF!

It is a CBS doubleheader week. I am sure CBS would not allow Niners at Saints 1pm ET to go against Pats at Chiefs 4:25. Ironically, that week the only FOX 4pm game is Jacksonville hosting San Diego 2 AFC teams in a cross over network game. Fox totally gave up the slot!
Reply
15 posts Jun 04 2020
TAKING L.A. RAMS FANDOM TO A NEW LEVEL