RAMS FANS UNITED
WE NOT ME
10 posts
Reply  QVIEW 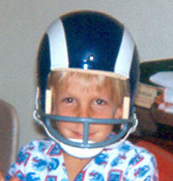 Practice Squad
Anyone have any good pics of the 1949 RAMS with the red helmets?
POST #1      TOPIC AUTHOR
I can't find squat online, just a couple of pics.
"Shoot, we'll fix that."

Hall of Fame
Anyone have any good pics of the 1949 RAMS with the red helmets?
POST #2

Practice Squad
Anyone have any good pics of the 1949 RAMS with the red helmets?
POST #3      TOPIC AUTHOR
I bought a mini-helmet and I'm trying to see how accurate the horns are compared to the real thing. Thanks, I'll check those vids out.
"Shoot, we'll fix that."

Hall of Fame
Anyone have any good pics of the 1949 RAMS with the red helmets?
POST #4
Ramsdude, Elvis liked this post

UtahRam wrote:I bought a mini-helmet and I'm trying to see how accurate the horns are compared to the real thing. Thanks, I'll check those vids out.

fwiw, 1948 was the first year the rams sported horns on their helmets, fred gehrke painted the horns on each leather helmet by hand, and he was also tasked with touching up his paint jobs throughout the season... the following year, 1949, the league lifted its 1-year ban on plastic helmets and the rams decided it was time to finally make the move from leather to plastic, so for the first time in their history the rams sported plastic helmets instead of leather, and never looked back.

riddell, the manufacturer of the plastic helmets, not only supplied the rams with their new helmets but they also took over horn duties - after just one year of painting rams helmets by hand, fred gehrke was off the hook.

but instead of using gehrke's classic, beautiful horn design, riddell chose to use one their own stock horn templates, it was one of many stock templates riddell used at the time for high school and college teams... thankfully riddell's horn template was ditched by the rams the following year, along with the red and yellow colors, and riddell created a custom horn template for rams helmets that matched gehrke's original design.

here's a 1949 los angeles rams game helmet (claimed) that sold at auction some years back - altho it would be very tough to confirm its authenticity imo, it is certainly an authentic riddell rt helmet from that era complete with riddell's stock horn template pattern, and exactly what the 1949 rams helmets would have looked like: 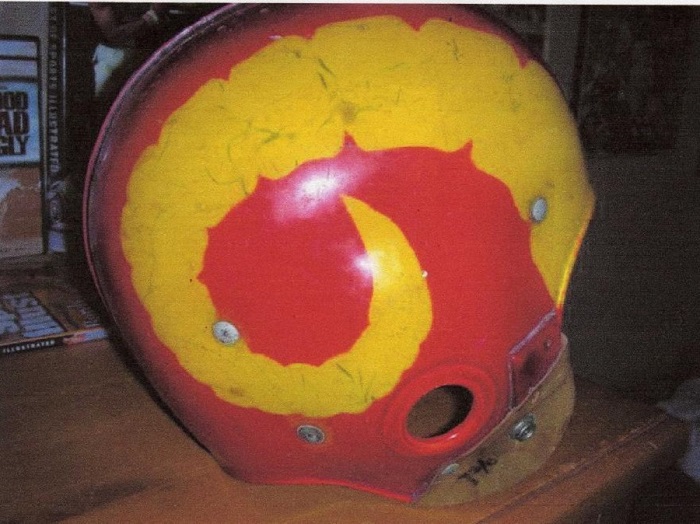 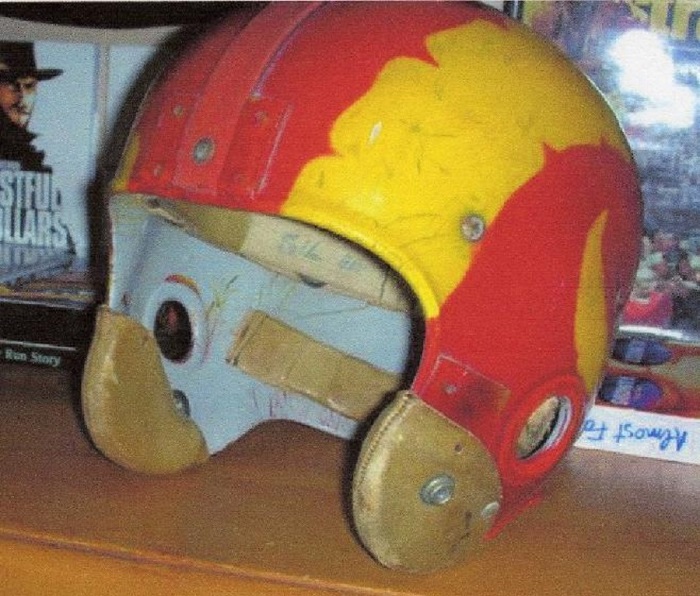 here's another authentic riddell rt helmet from the early to mid 50s with riddell's stock horn template, most likely a high school or small college helmet: 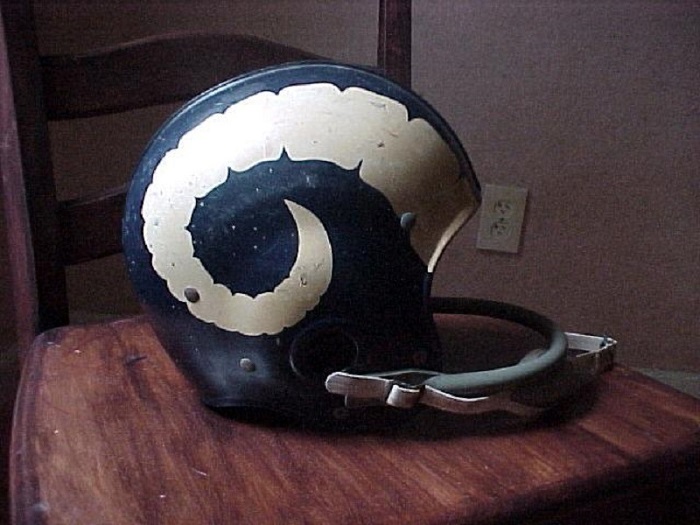 and here's a vintage photo of a college team sporting a riddell rt helmet with stock horn template: 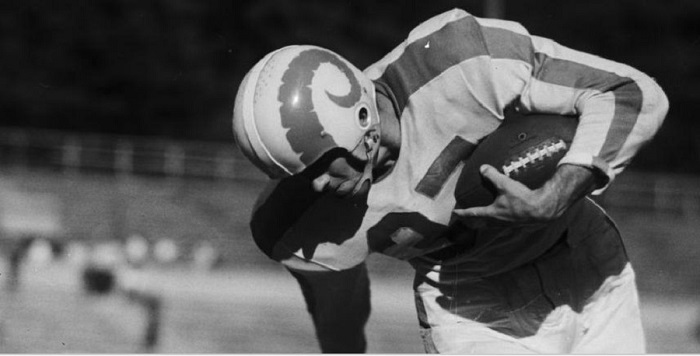 and, finally, here's an early '50s game used rams helmet made by riddell, it shows the custom horn template that riddell created for the rams for the 1950 season, it replaced the riddell stock horn template (which the rams only used in 1949), and was much truer to fred gehrke's original 1948 design: 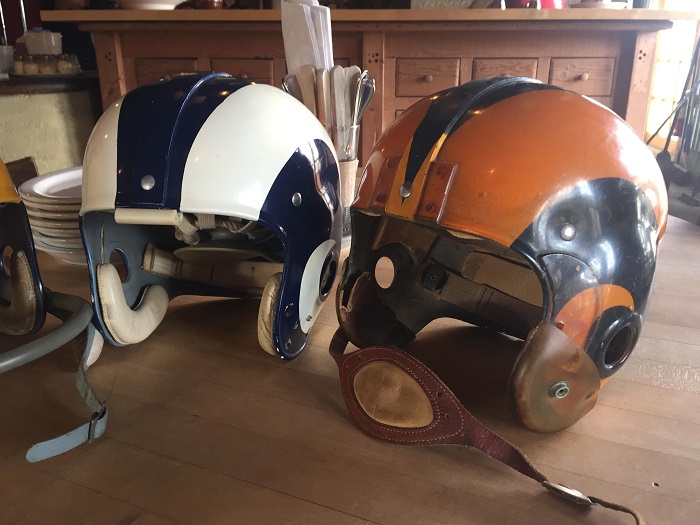 Moderator
Anyone have any good pics of the 1949 RAMS with the red helmets?
POST #5
The red one looks like a fire tornado.
I prefer the clean edge.
Nice stuff A-1 !
THE GREATEST SHOW ON TURF WAS

Practice Squad
Anyone have any good pics of the 1949 RAMS with the red helmets?
POST #6      TOPIC AUTHOR
Great stuff! Fred Gehrke went to high school a couple of minutes from where I live. I regret never getting his signature on anything.

Here's the mini-helmet I recently picked up and comparing the horns with an original I think this guy did a good job. I need to figure out a way to get some leather ear caps for this.

Practice Squad
Anyone have any good pics of the 1949 RAMS with the red helmets?
POST #7      TOPIC AUTHOR
Did you see this beauty sold at auction last week for 4K + :

Hall of Fame
Anyone have any good pics of the 1949 RAMS with the red helmets?
POST #8

UtahRam wrote:Here's the mini-helmet I recently picked up and comparing the horns with an original I think this guy did a good job. I need to figure out a way to get some leather ear caps for this.

i think the horns are accurate, especially for a mini helmet, but getting wrap around leather jaw pads for it will indeed be a challenge i would think!

speaking of the leather jaw pads from that era, riddell really went beyond the extra mile when they took over helmet horn duties for the rams, when they stopped using their stock horn templates and instead created a template that was truer to gehrke's.

for example, riddell made custom leather jaw pads exclusively for the rams helmets - the custom jaw pads featured transparent vinyl on the outside and leather on the inside so that full horn would be visible as opposed to being covered by the exterior leather portion of the jaw pad:

also, these vintage riddell helmets consisted of 3 parts, two half shells (i.e. a left and right helmet shell) that were glued together to form the full helmet shell, and a plastic center strip that was riveted to the seam that the shells created which secured the two halves.... however this center strip created a problem in that it covered the front of the horns that were painted on the inside of the helmet, where the horns formed a "v", so riddell hand painted the "v" on the center strip - talk about dedication! 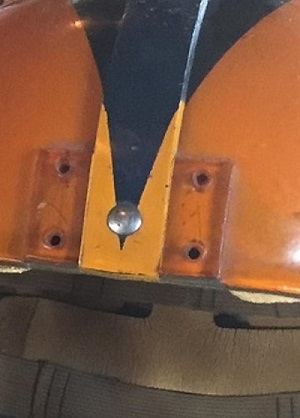 UtahRam wrote:Did you see this beauty sold at auction last week for 4K +

i've actually seen this helmet in person, handled it, in fact i was asked to evaluate it many years ago (i used to be an avid collector of vintage football helmets and was often asked to do authentication work for the big sports memorabilia auction houses and the pro football hall of fame)... i knew the original owner of the helmet, who had the helmet signed by tom fears, here's the other side of it: 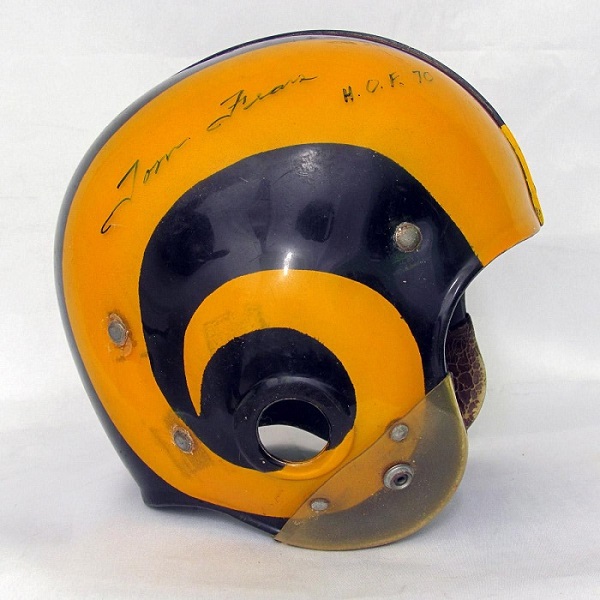 back in the day, when i was a very active collector, my white whale was always a vintage rams rt helmet (like the one in the photo you posted, the "fears" helmet), they were exceedingly rare, in over a decade+ of collecting i had only seen one surface at auction, and the only other one i was aware of was on display at the pro football hall fame.

then i was asked to look at the one you posted, it was the first time i had ever seen one in person, which made me want one even more, but the owner was looking for a huge number because he claimed it had belonged to tom fears, i passed.

i finally did locate one, it belonged to rams all-pro linebacker don paul, and it's easily my favorite helmet in my collection... anyway, the moment i finally located one a few more surfaced at auction, then a couple of more, it was so strange, after years and years and years of only seeing one pop up at auction, it started raining vintage rams rt helmets, ha ha... well raining is a gross overstatement, they are still extremely rare, and usually come with a pretty hefty price tag if you can locate one!

but speaking of rare, this is the rarest rams helmet of them all, that surfaced at auction a few years back, an authentic leather rams helmet painted by fred gehrke... how rare is this helmet? so rare that the pro football hall of fame has never been able to get their hands on one, in fact the one they have on display was actually the result of the hof asking fred gehrke to paint one for them before he passed. here's the one that sold at auction: 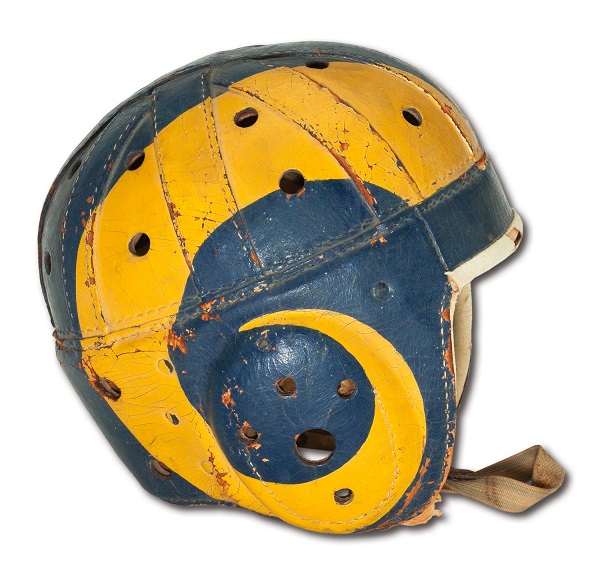 here are a few vintage rams helmets from my collection, including don paul's helmet (far right): 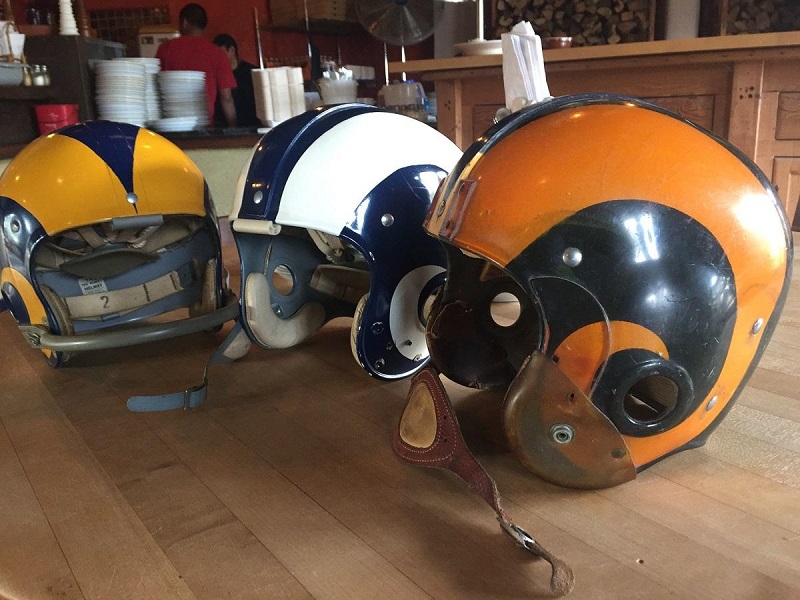 Practice Squad
Anyone have any good pics of the 1949 RAMS with the red helmets?
POST #9      TOPIC AUTHOR
Elvis liked this post
Great set of helmets you have there! Those look awesome. I love those thick horns. I started posting about how thin the horns are on our current helmets back on the Post Dispatch board when the RAMs were still in St Louis. I have seen more people catch on and wish for thicker horns too. I wrote Kevin Demoff last season and asked him to consider the change. The current helmets look terrible IMO.

I remember seeing a RAMS painted leather helmet in the trophy/memorabilia case at Anaheim Stadium back in the 80's. That may have been a fake. That pic of the leather version is great- would love to own one.

My stuff is in storage now so I can't supply pics at the moment but I own a John Cappelletti helmet, Flipper Anderson's rookie helmet and a blue-white helmet with painted horns and one bar face mask that was described to me as being used with other official equipment for a photoshoot for an ad for RAMS tickets. The photog was given a bunch of the equipment after the photoshoot and I figured the ad probably ran in RAMS programs in 1972 since that was the last year they used paint before going to white decals in 1972 and yellow in 1973. I had been looking for cheap RAMS 1972 game programs on ebay so I can try and find the ad. The seller did give me a photocopy of the equipment picture.

That's the earliest official helmet I have although I do have own a real boss McGregor child's Blue-Yellow helmet that must have been late 50s-early 60s before the RAMS went to Blue-White. Nice thick horns on that one!

Practice Squad
Anyone have any good pics of the 1949 RAMS with the red helmets?
POST #10      TOPIC AUTHOR
Elvis liked this post
Here's pics of my One-Bar helmet with painted horn...