RAMS FANS UNITED
WE NOT ME
4 posts
Reply  QVIEW 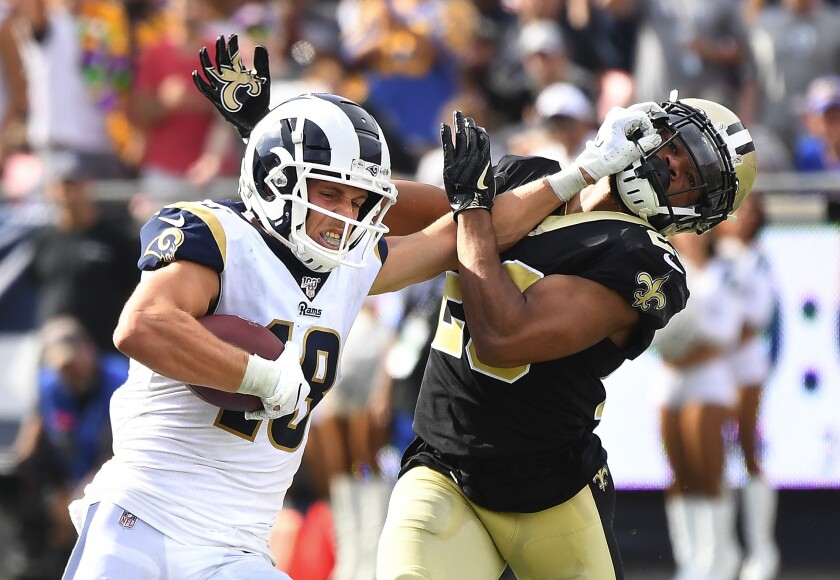 It began as a typical Cooper Kupp reception.

In last week’s victory over the New Orleans Saints, the Rams’ slot receiver lined up on the left side, and then broke toward the middle of the field, catching a pass from quarterback Jared Goff at the 40-yard line. Kupp ran with the ball for 10 yards — and then things got interesting.

As Kupp crossed midfield at full speed, Saints cornerback Marshon Lattimore closed in. That’s when Kupp, without breaking stride, extended his left arm and stuck his hand in Lattimore’s face.

The expertly executed stiff-arm move stunned the defender, and helped spring Kupp for a 66-yard gain.

“It’s a really good tool to have,” Kupp said Thursday.

His best stiff-arm ever?

The stiff-arm has been around for as long as football has been played. The Heisman Trophy statue depicts a bronzed ball-carrier in a perfect stiff-arm pose.

Hall of Fame running backs Earl Campbell and Walter Payton are among those who expertly employed the move in the 1970s and 1980s, and Hall of Famer LaDainian Tomlinson, Marion Barber and Adrian Peterson were among those to carry the torch into the 2000s.

Rams running back Todd Gurley is regarded as one of the NFL’s best stiff-arm practitioners, not for violent punches but for his ability to keep defenders almost endlessly at arm’s length.

“He’ll stiff-arm a guy for 15 yards while he’s running full speed,” said former NFL running back Maurice Jones-Drew, the 2011 rushing champion. “The guy will try to dive at his legs and he’ll just run them into the ground.”

“It’s a knack that certain guys have to keep people off of ‘em,” Phillips said.

According to NFL rules, a blocker can be penalized if he “thrusts his hands forward above the frame of an opponent to forcibly contact him on the head, neck or face.” It is a foul for a defensive player if he does the same.

But “a runner may ward off opponents with his hands and arms.”

In 2008, the NFL seemingly took steps to even the playing field when it made calling penalties for extremely violent stiff-arms a point of emphasis for officials. The change was unofficially dubbed the “Marion Barber rule.”

“Some people used to use it basically like a punch, with an open hand as violent as you possibly can,” said Rams running backs coach Skip Peete, who coached Barber with the Dallas Cowboys. “Now it’s more of a just extend, ward off and push.”

Rams offensive players practice stiff-arm drills once a week, using tackling dummies. Emphasis is placed on keeping the ball tightly secured in the opposite hand, with the wrist high above the elbow.

“It’s a lot easier to stiff arm a defensive back than a linebacker,” receivers coach Eric Yarber said of his charges, “so they make it part of their arsenal.”

Yarber recalled how former teammate Art Monk, a Hall of Fame receiver for the Washington Redskins, worked on and effectively deployed the stiff arm. Kupp did the same against the Saints, Yarber said.

“Practice and preparation equals game reality,” Yarber said. “That’s what it was.”

“Anytime something’s coming after you, you always tend to stick your hand out to get it away,” he said, laughing, “I think it translated to football pretty quick at a young age.”

The “surprise tactic” of the stiff-arm is all in the timing, receiver Robert Woods said. Throw it too early, too late or too weakly and it will not affect a defender. And use core strength as well as the arm, he said.

“It’s not just the punch,” he said. “It’s about being stiff and not letting the elbow bend, to just keep him at a distance.”

Defensive players abhor what they view as a double standard: Why are they not allowed to grab an opponent’s facemask, but players carrying the ball are rarely penalized for it?

Robey-Coleman has vivid memories of a Peterson stiff-arm in 2014, when the future Hall of Famer was starring for the Minnesota Vikings.

“I would rather get punched in the face by somebody else than get stiff-armed by him,” Robey-Coleman said, laughing. “That was the most manliest stiff-arm I ever had in my whole life.

“I didn’t know that to think. Is my chest OK? Neck OK? He’s super strong. Nobody tops that one.”

But defensive players accept the stiff-arm, and do their own drills to “chop” through it or push it above the offensive player’s shoulder.

“That’s the beauty of being a defensive player,” safety John Johnson said. “You got to fight through certain things.”

Kupp feels for defensive players on the receiving end of a stiff-arm, especially if the offensive player pulls the facemask.

“It’s hard for an offensive player to argue that,” he said. “But as long as I’m not grabbing the facemask and tugging and pulling it or anything like that, a little punch to the face is not that big of an issue.”

Starter
Re: Rams Cooper Kupp and Todd Gurley well-armed for stiff competition with tacklers
POST #2
Looks like he’s got a pretty good handful of face mask right there.

Hall of Fame
Re: Rams Cooper Kupp and Todd Gurley well-armed for stiff competition with tacklers
POST #3
I guess they don't call it if he's pushing it instead of pulling it. I wondered why no one was talking about the face mask. Refs don't typically call it.

Administrator
Re: Rams Cooper Kupp and Todd Gurley well-armed for stiff competition with tacklers
POST #4      TOPIC AUTHOR
A stiff arm to the face mask is legal if you're the ball carrier and don't grab or twist it...
RFU Season Ticket Holder
Reply
4 posts Jun 05 2020
TAKING L.A. RAMS FANDOM TO A NEW LEVEL