Veteran
Hopes for the D in 2019
POST #1      TOPIC AUTHOR
aeneas1, R4L, CanuckRightWinger liked this post
Fugly stuff for most of 2018, wimp-like, in fact. Last in the league versus the ground game, which really bothered me, and the pass defense was on separate pages for three quarters of the season.

The reasons for that are many, and have all been posted before.

So, here’s what I am hoping the Rams defense becomes this year, by position.

DT Aaron Donald: Most might say nuff said, I think he’s got to play the run like he did in the playoffs. Not as many sacks, better football team.

NT Joseph Day/ Gaines: Be competent, those ILB’s were washed out so many times last year. It is not against Wade’s principles for the NT to slow up the OL on the way to the QB, as some have surmized. You think they drafted Gaines for his quickness?

DE Brockers/ Franklin Myers: Brock has to be better. Great team player and all that, but too often last year a non factor for the talent he possesses. Played better towards the end of the year, so maybe he was dinged up. Should be able to help shut down the run to his side, and he’s got enough reps there now to make that bull rush more consistent. Brock is probably a cap casualty next year, so Franklin Myers will be interesting to see if he progresses.

OLB Fowler: Wildcard. Really liked how much better he played the run last year ( hey Samson, set an edge, whydoncha?) and the talent is obvious. Don’t put any stock in him getting off the ball quicker this year like Gurley said. You are what you are. Contract year, last year was a contract year, too. Wildcards sometimes are aces, sometimes they’re deuces. Hoping for the former.

OLB Mathews: No Clay feet. I can accept that some of the lateral quickness is gone, but he can’t play downhill all the time with Fowler on the other side. I’m hoping that Clay isn’t a problem, cuz he sure looked like he was slowing up to me. High on the likely to get injured scale, too. Provides LB size, something lacking last year.

ILB Littleton: Huge fan, guy played great for his first true kick at the can. Get’s washed out too often, but with the position change, should be able to use those instincts a little more. Won’t have to set the D.

ILB Hager: How bout those Dodgers? OK, there’s some rooks, but that is asking a lot.

CB Talib: The second most important player on this defense cannot fall off with age, and I am hoping he won’t. Really enjoy the masterful techniques this man employs. He’s fun to watch. Personal opinion is he has at least two years of high level play left.

FS Weddle: Hoo boy, can’t wait to move on from Joyner. Props to Snead on this one, going from “ I don’t get it” to “ I do”! Odds are Weddle will continue to slow down, I am hoping it is not too much.

SS Johnson: Gets better every year, why should this year be different?


Like most on here, every year, you read the same old same old.

It goes something like this: The Rams will be a top 5 or 10 defense this year.

I chose not to participate in those posts because I knew they were wrong.

Got a real chance to be top ten this year.
Gentlemen. You can't fight in here. This is the War Room.
3

Hall of Fame
Re: Hopes for the D in 2019
POST #2
Rams D gave up a little more than 19 points a game in the playoffs... that would've been top 5.
I don't expect top 10 in scoring and yardage.. but wouldn't be shocked. The secondary is stacked.. and deep. Rapp makes me really happy and less concerned about anything 2nd and 8 or longer because he'll be on the field instead of Hager.
Edge is deeper than in a while and should do enough for them to have a good pass rush.
Big question is Gaines and SJD.

Dick84 wrote:Rams D gave up a little more than 19 points a game in the playoffs...

and their postseason opponents included the 2nd and 6th ranked scoring offenses (saints, pats)... when i look at the rams defense, as a whole it strikes me as an embarrassment of riches, it should have been much better last year (even allowing for talib's absence) and it should be a top defense this year.

here's a look at how wade fared in offensive points allowed rankings in his first three years on the job, would love to see him do a third year repeat of his saints, donkeys and cowboys stints! 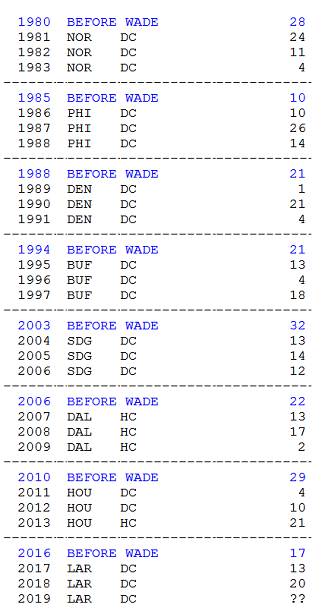 "ILB Hager: How about those Dodgers"

Hall of Fame
Hopes for the D in 2019
POST #5
I expect the defense to be much improved. Why? Dunno. Can't put my finger on it. Just feel they will be improved. Stupid eh?

Hall of Fame
Hopes for the D in 2019
POST #6
last year the bears ranked league best in fewest offensive points allowed, the bengals dead last, and the rams 20th - here's a look at where their opponents ranked in offensive scoring.