These rankings are attempting to consider a team's skill-position talent without including the impact of the quarterback, offensive line or scheme. This is extremely important. If you're getting angry because these rankings don't include the impact of Tyron Smith, Tom Brady, or Matt Nagy, you're wasting your time. This isn't a list of offenses

> These rankings don't include contract value. I'll mention a contract here and there, but if a team has a good player on a bad deal, the money doesn't matter for the purposes of this piece.

> I'm solely considering how these players will perform in 2019. I'm looking at typical aging curves and injury histories to estimate how a player will perform in the upcoming season, but I'm not focused on anything after 2019. I'm also factoring in suspensions or likely suspensions, which cap the value of players like Hill and Kareem Hunt.

> Top-level talent wins out over depth. To try to sort between the various teams, I generally focused on each team's top six options across running back, wide receiver and tight end, as those are the guys most likely to see the field. I gave a bit of extra credit for truly transcendent weapons like Julio Jones and DeAndre Hopkins, who manage to shoulder enormous workloads while playing at a high level. When there were relatively similar scores, I gave the edge to the team with more depth, which helped the likes of the Eagles and Patriots move up the board.

> Finally -- and this is also important -- I didn't mention everyone. Just because a player isn't discussed in the blurb doesn't mean he wasn't considered as part of the analysis. In some cases, I only briefly touch on star players, if only because I don't need to tell you how good Michael Thomas or Ezekiel Elliott are.

Indignant Chiefs fans are likely yelling about Todd Gurley and Cooper Kupp right about now, and indeed, there are reasons to be worried about two of the Rams' stars. Kupp is returning from a torn ACL and should be active for Week 1, but it's impossible to say whether he will be the same guy who was on pace for 1,132 receiving yards and 12 touchdowns before blowing out his knee.

Gurley is a scarier proposition. The reports suggesting he is suffering from arthritis in his knee seem to be accurate, and everything the Rams have done and said suggests that the days of Gurley taking 90-plus percent of the offensive snaps are over. Los Angeles is enthused about third-round pick Darrell Henderson, and ESPN college football guru Bill Connelly raved about Henderson's explosiveness before the draft, but Gurley was the best running back in football when healthy over the past two years. It's tough to imagine the Rams will get that sort of volume and efficiency from a combination of Henderson and an arthritic Gurley in 2019.

With that being said, this isn't a binary problem. Gurley probably isn't going to average nearly 23 touches per game or average five touchdowns per month like he did from 2017-2018, but he could still be a very useful running back in the range of 15-18 touches per week. That's less exciting for fantasy football, but it's probably better for the Rams, especially if Henderson delivers on the preseason hype. There's not much at tight end here, but when you think about just how deep the Rams are at wide receiver with Kupp, Brandin Cooks and Robert Woods, even 85% of the old Gurley is enough to propel the Rams to the top of the weaponry charts. 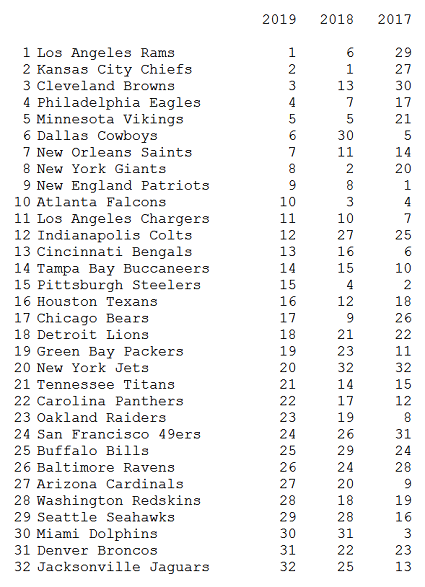 in 2017 barnwell figured that the rams skill position group was no better than 29th - one year later, in 2018, he adjusted his thinking to the rams having the nfl's 6th best skill position group, ha ha... who knew that swapping watkins for cooks and letting tavon go would be the difference between a 29th ranking and a 6th ranking, yeah baby!

That’s not directed at this specific thread, just sayin.
Gentlemen. You can't fight in here. This is the War Room.

ramsrams wrote:I will be happy when “list” season is over.

That’s not directed at this specific thread, just sayin.

This time of year there isn't much to write about. So they come up with this stuff. I have feeling not all of these lists are the writers true opinions. Sometimes its just to elicit a response via clicks and views.